An Update Since It's Been a While

Hi all. Not a whole lot to report on from Ski-land. My only recent gaming of note has been a couple sessions of D&D with the family. My brother-in-law thought we owed it to our kids to introduce them to traditional role-playing and we did. Unsurprisingly, the kids washed out early, but the grown-ups had a terrific time. It's been 3 or 4 weeks since the last session but we'll probably pick it up again next weekend. When we left off, the party had just walked into a cult ceremony of some description. Good thing we were all wearing cult robes and are disguised enough to get by!

I did finish another batch of 24 20mm Prussians for my Napoleonic project. I know, I know... pics or it didn't happen. I've got a drawer with about 100 unbased Naps in it. They'll soon start getting based . It was an effort to keep the basing consistent across all the elements. I've also got a dozen French chevaux in the queue with their riders close behind. 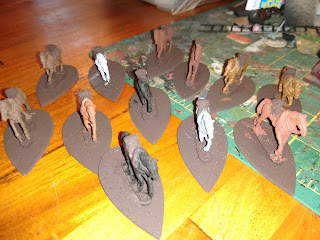 Ziggy and I are actually going to play a real, proper 6 x 4, d-handful wargame this afternoon. It's been a while for both of us - about 2 months! We're going to play Rate of Fire WW2 using my 20mm / 1/72nd minis. A bit of the old Eastern Front. Technically speaking, it's a scenario playtest for the game I'm taking to Mike's in a few weeks for Tanksgiving. Either way, it's toy soldiers shooting each other and I'm very excited.
Posted by Ski at 8:23 AM

Email ThisBlogThis!Share to TwitterShare to FacebookShare to Pinterest
Labels: Napoleonic, Text Only