My Step Into Naps

I resisted for a long time. Then about 3 years ago (November 9, 2016) I stumbled upon a dirt cheap box of French infantry on GameKastle.com. Since then, I've been slowly painting and collecting French and Prussian forces to play some flavor of Napoleonic games. Muskets, cavalry, cannons... all that good stuff. My plan, once I finished my first batch of infantry was to hold off on basing anything until I had a lot more done so that the basing technique would be the same for the entire collection. Every few months I'd paint something... some horses... some infantry.... some cannons. Every so often I'd order a few odds and ends so that at the very least I'd have two similar armies to play with.

After cranking out a decent amount of work over the course of three years, I've finally gotten around to basing the majority of what I've done so far. I'm quite tickled with the results. 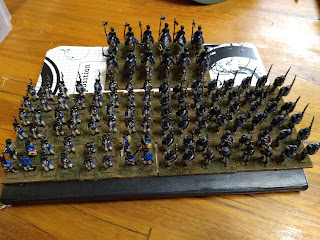 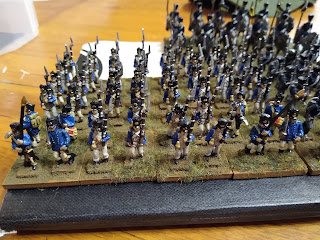 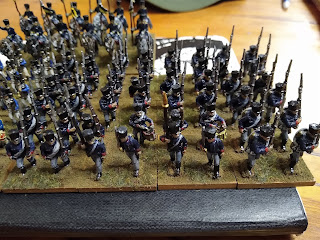 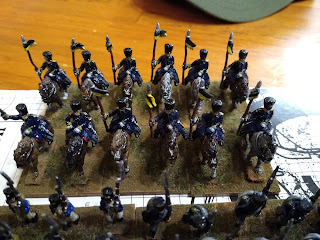 I know there are probably serious issues with uniform details. I'm not going to sweat it. The mass of pointy guns is the reward. I need to hit the lot of them with some Dullcote - most are pretty darn glossy right now. I've got 12 French cavalry in the painting queue. Once they're done I'll wrap up the French gun battery and be ready for a small game of whatever. I do need to add some banners as well.

It's been a fun slow-burn project that's finally produced real results. Oh, the minis are from "Napoleon at War" by Man at War (French and Cavlary) and Newline Designs. Although the N@W minis (now out of production) are nominally 18mm, they're big and match up better against 20mm minis, which is what the Newline Prussian infantry is.
Posted by Ski at 9:09 PM