Files of X - A Thorough Test

My bride and I played a thorough test game of my simple skirmish rules last night. It was also a nice test of some of the scenario ideas I've been kicking around recently. It also severed as a wonderful inaugural game on my new Frontline Gaming mat which took its sweet time getting to me! Ordered Aug 9, arrived Sept 7).

I got to use a lot of new scenery items I've been making and collecting recently including the fall trees, hay bales and rolls, corn maze and road tape. 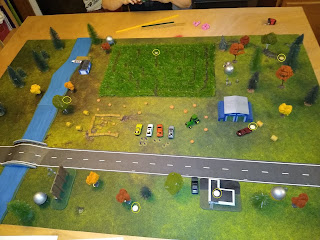 I was very pleased with how the layout looked and my wife, a Halloween-ophile was equally excited.

So the scenario was this - the FBI and Army arrive at the farm to investigate a UFO sighting. Four alien saucers have also just landed at the farm. All the groups are hunting for the McGuffin Spores - the FBI for research, the Army to destroy and the Aliens to recover. There are six possible Spore locations on the battlefield and the teams would have to investigate them to find the correct location.

I've circled in yellow the exploration points on the map. The spacemen start near their saucers while the FBI begins in the parking lot in the center of the map. The Army dudes arrive in a AFV from one end of the road, in this case randomly determined to be the left side looking at the picture above.

The first few turns were fairly quiet as we both nosed around towards the objective locations. 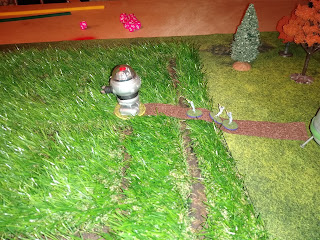 The aliens used their giant robot to cheat the corn maze, stomping a path straight through! 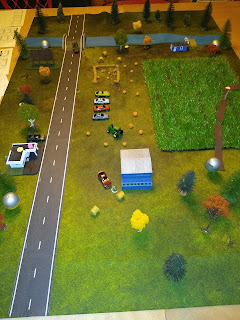 A view from the end of the table. The Stryker has finally made it to the game (way down there just getting over the bridge). Tobor has made good progress stomping through the field, literally leaving a path of destruction. 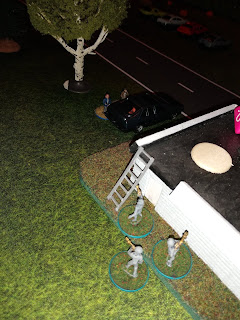 Scully and Mulder plug the alien who made it to the roof of the gas station. 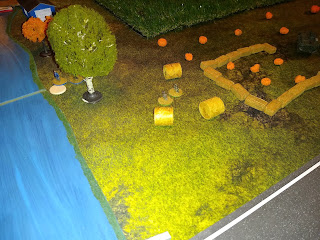 Meanwhile, Agent Reyes takes a look at the glowing stuff by the river. A couple of soldiers take up positions near them. 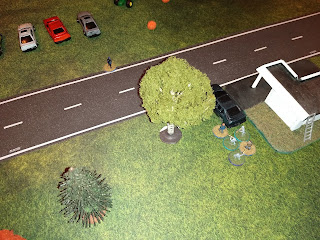 Feh. The aliens bum rush my heroes. One of their FBI agent brothers heads over to help. 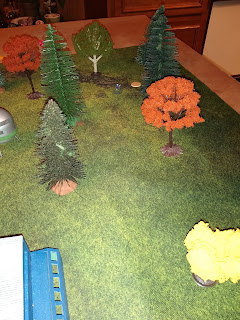 One of the alien commanders taking a lonely stroll through the woods in the dark. If that objective turns out to be the right one, I'm screwed. 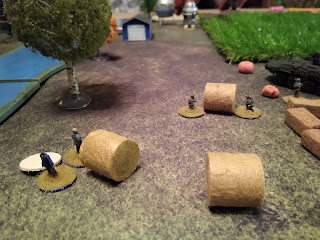 Heh heh. Reyes actually found the thing by the river. She and Doggett head back to the parking lot to get out of Dodge! The Army dudes spy Tobor in the distance - "Sarge didn't anything about this!" 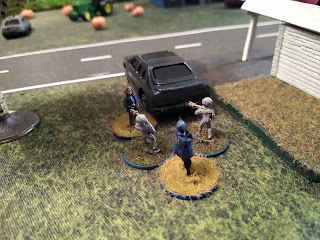 Blast! Mulder is knocked out. The unnamed agent takes his place in the tango. 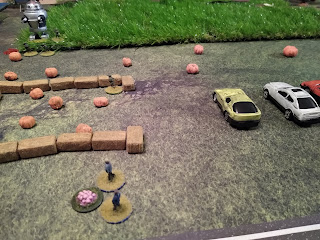 Reyes and Doggett make good progress to the cars. Tobor is right behind though and the Army guys are doing their best to slow him down. I rolled a die to see which car this pair had keys to. Spoiler alert - it was the orange car. I also replaced the wooden counter with something a bit more appropriate. 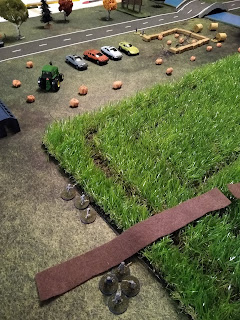 Although things are looking good for me, the Aliens are not giving up and a large mob of them are getting close! 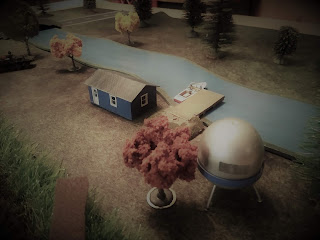 I do like how this scenery looks on the tabletop. 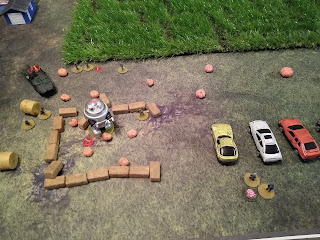 No time to admire the view! Tobor pushes past  the troops, hellbent on cathing up with the Spores. 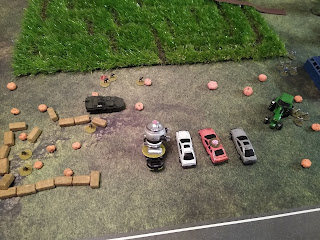 The agents hop in the car while the robot makes short work of another car. The spacemen prepare to pepper the car with ray gun blasts. 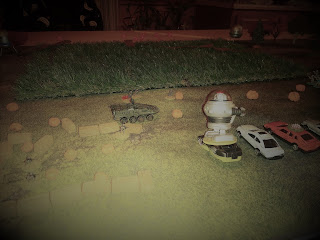 The soldiers continue their pursuit of the mechanical monster, desperately trying to stop it before it catches up with the agents. 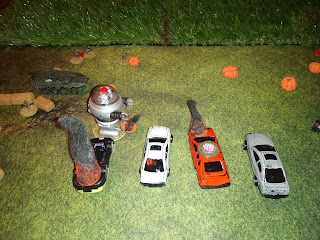 Moments later, blasts of electrical energy smash into the car with our heroic agents in it, destroying the car and taking out Reyes and Doggett. At nearly the same time, the soldiers finally manage to take out the robot. About 10 seconds too late! 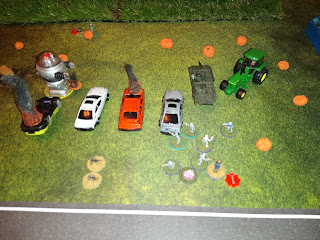 The space men win the race to the Spores and have the numbers to enforce it! Scully's no wimp and gets into the mix. 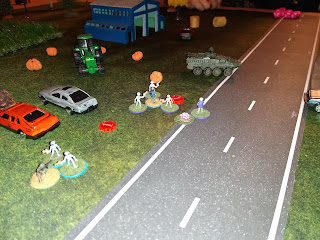 The Aliens' numbers take their toll. It doesn't help that the Stryker's gunfire hasn't hit anything in recent memory! An Alien commander graps the Spores and legs it toward the nearest saucer. 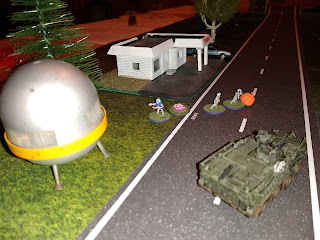 The vile invaders also seem to be interested in carving a jack-o-lantern! The Stryker is all I have left. 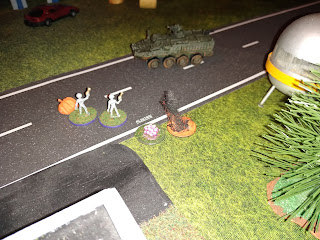 The AFV's weapon fire FINALLY makes contact and the Alien commander is vaporized. A day late and dollar, pumpkin and extraterrestrial spore short. The other space men swiftly scoops up the Spores and are off, into their saucer. 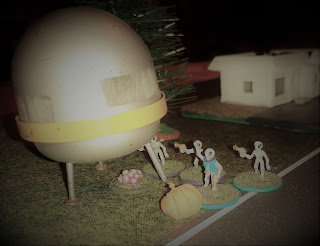 The winners pose with their very hard-earned loot!


Oh wow. What a terrific game! I can't remember such an enjoyable playtest. Not only was it productive in locating rules tweaks but it was well-balanced, thematic and just a great story. I can't believe the stupid aliens won.