Ziggy and I put Infinity on the table Saturday evening. I went with a thick jungle theme this game instead of the more typical urban battle zone. For what was a very one-sided slaughter, it was at least a good looking game! My Ariadna French force completely whipped the Pan Oceana knights, setting things right in the world. No real AAR, but a few pics of the proceedings. 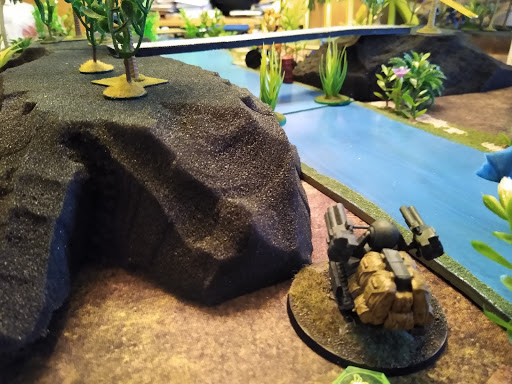 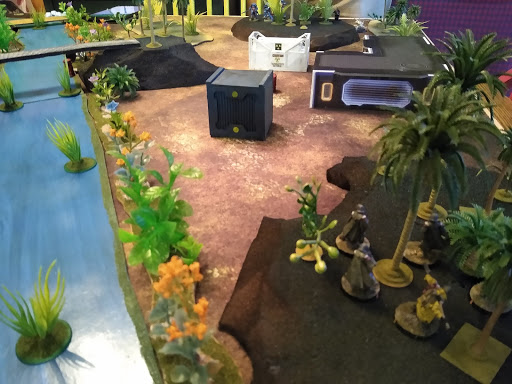 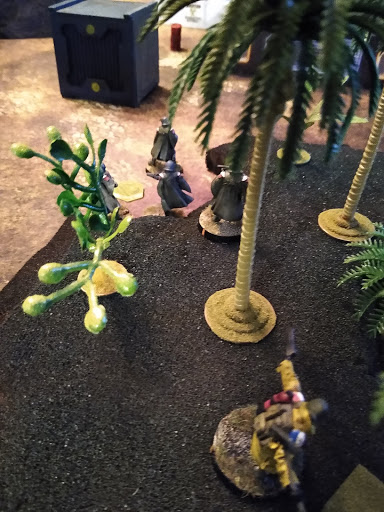 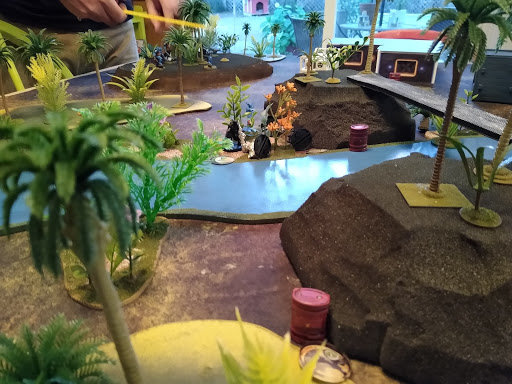 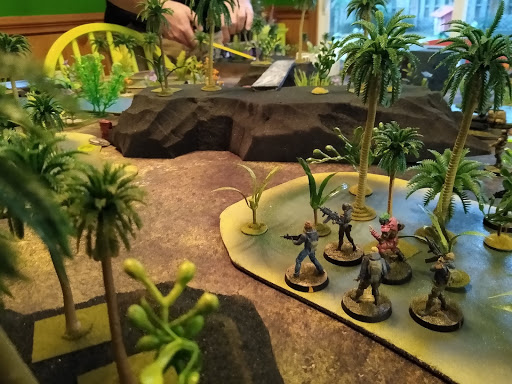 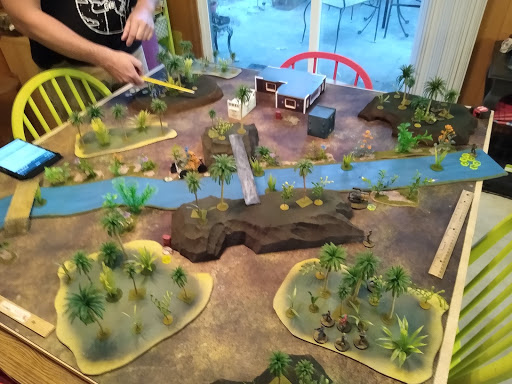 Haven't posted in a bit. Just doing a bit of a recap of the last couple weeks. Mark, Ziggy and I got together for games of Swordpoint (Italian Wars-flavored armies) and Rank and File Napoleonics on Memorial Day weekend. Both games were a lot of fun - certainly different fare for us given our sci-fi and moderns tendencies. 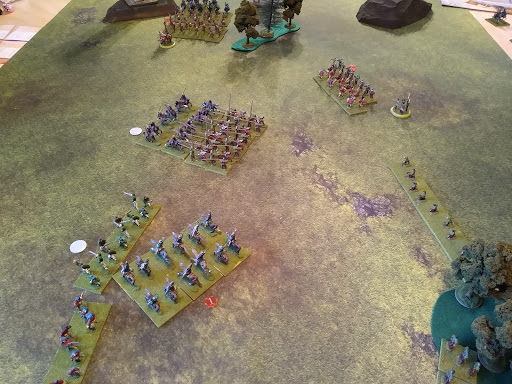 My second unit of cavalry charged into some greatswords while my pikemen and Mark's cavlary duked it out in the center. The pikemen went haywire and absolutely thrashed the cavalry!

In the end, I won with my "Ventian" army, but the "Spanish" performed well and I'm excited to see these two groups get back at it again. I was happy with the Swordpoint rules. Not a bad addition to the collection at all.

Ziggy arrived part-way through the first game. We left the terrain exactly where it was for game 2 since it was also a 20mm affair, this time Naps, Prussians and French. Ziggy commanded the Prussians while Mark and I split the French. Mark was going to have to leave a bit early so it just made sense.

A tremendous game with a huge swing half-way through. Ziggy was running us ragged in the early turns. Mid-way through, Mark left and all of a sudden the luck changed. My dice woke up and Zig's cooled off. R&F always delivers a fun game with simple mechanics. We did make one house-rule change from the last game Mark and I played though. We reduced the morale effect that casualties have upon units. Instead of a -1 modifier for each stand lost, we changed in to -1 for every TWO stands lost. Units stick around longer and there is more fighting and less running away. It was a solid improvement. The skirmishers were a fun addition and the leader models got their first outing. A wonderful day's gaming for sure. Thanks both of you, Zig and Mark!

So, what else has been gong on? Some painting, so starters. I picked up some interesting models to start a Stargrave crew and painted them up last weekend. 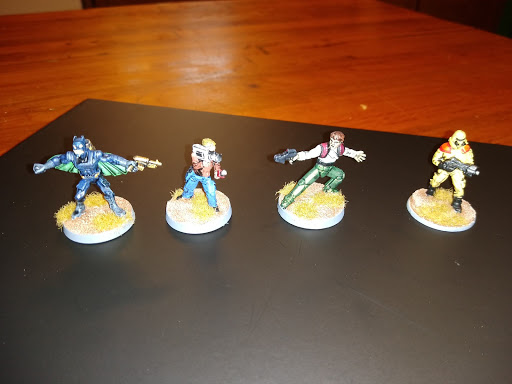 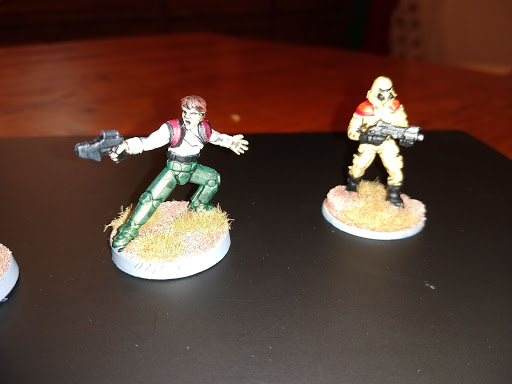 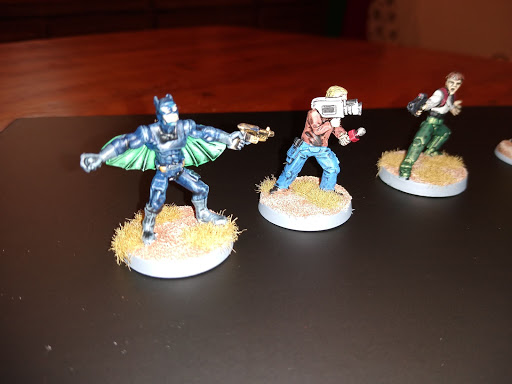 The Bat-Guy and reporter are Warlord minis from the Judge Dredd line. The other two are Reaper Bones. Much of the appeal of games like Stargrave/Frostgrave is finding and painting up an interesting selection of figures. I've got a handful more incoming from Gamekastle and will leverage some of the Infinity collection for others.

I also scratch-built a 15mm house just because I felt like it. I have some similar buildings in the collection. 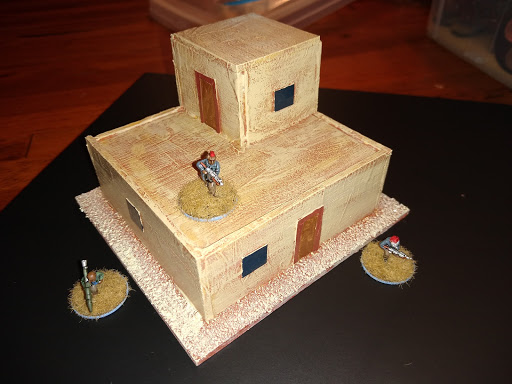 David and I had a mini games-day for some of his Boy Scout troop yesterday. We played Rink Racers, King of Tokyo and X-Wing. Eight hours of goofing off and rolling rice - not a bad way to spend a Saturday!
Posted by Ski at 10:58 AM 1 comment:

We did manage to get some games played on Sunday over the weekend. I'll post an AAR some time this week. Yesterday I knocked out some Infinity models that had been in the queue a few weeks. They were a real piece of work to assemble, but once I settled on a painting strategy, a lot of fun to finish up.

I guess it's pretty obvious that they're close-combat specialists. This herd and the herder in red will make a nice inexpensive (points-wise) addition to my Combined forces. 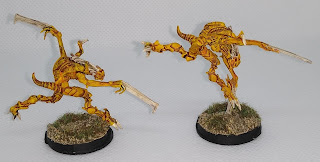 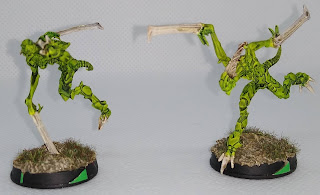 The action poses are pretty incredible and the lengthy and difficult build should be rather apparent. I did put 25mm washers under their bases to lower their center of gravity figuring anything that shape would need all the help it can get.