Today was Second Amendment day for the Skis. Three quarters of the fam headed down to Richmond Hill to the WMA range for a bit of shooting. My sixteen-year-old was working otherwise he'd have been there, no question. This was my youngest son's first time shooting; he just turned 12 a couple weekends ago. 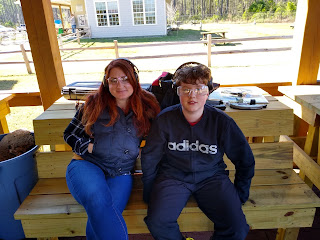 The Bride and Cameron. 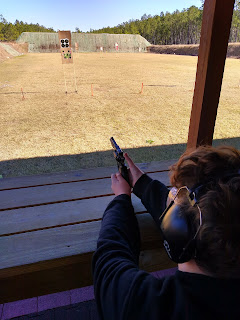 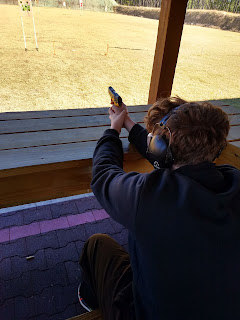 And with the 9mm. 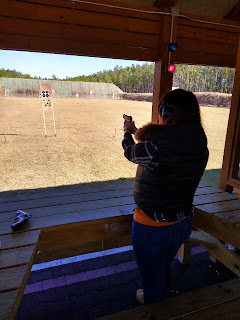 Wifey getting used to the 9. We bought it last Spring and this was the first time we'd fired it. She's never done much shooting but now she's comfortable with the basics and with the weapon itself. There was female shooting instructor next to us that helped my wife with some solid advice. We got her card and may give her a call for some further instruction. 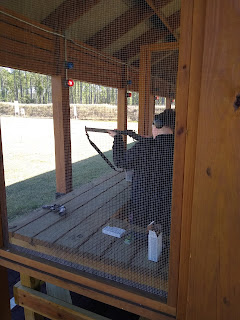 They boy with my M6 Scout. This gun was a hit. Four other shooters asked about it. I got it back around 2005/2006 for a little over $200. It's an over/under  22/410 survival rifle that was originally issued to USAF pilots in the event they went down and needed something to use to hunt game.They sell for over $500 now - out of production for over ten years.

In other news, more gaming related, I'll be heading down to Jacksonville for Rapier Game Con the weekend of February 7/8. I was talked into hosting a game and will be running some Check Your 6: Jet Age. I'll bring minis and paperwork for Arab-Israeli War and for a home-brewed Independence Day (motion picture) scenario with F-18s versus Alien fighters. It's something I've thought about for years and finally got around to making happen. 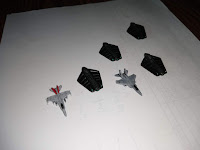 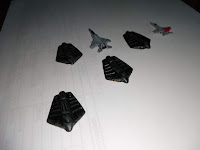 They'll do nicely I think. I'm excited about the con... haven't done much gaming recently and it should be good. Be well!
Posted by Ski at 4:58 PM No comments:

Email ThisBlogThis!Share to TwitterShare to FacebookShare to Pinterest
Labels: Aliens, Check Your 6, Off Topic

Since it's been a year and a half, Zig and I decided it was high time to put Dystopian Wars: Fleet Action back on the table. DW used to be a very regular game for us and it just sort of fell off the hot list. Last night we kicked it back into gear on the ol' 6x4 and had a quite entertaining battle featuring French and Polish land forces in an alternate steampunk past. 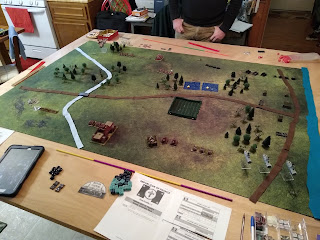 The forces arrayed. We put together 1200-point groups. and essentially the scenario was just a slaughter-fest. 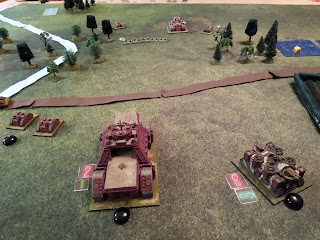 My two landships both started the proceedings by getting just pounded. Grrr. 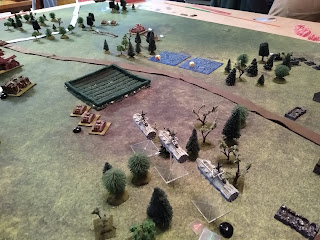 French scout fliers pass over a wood. Their broadside fire would silence one of the three Polish artillery pieces. 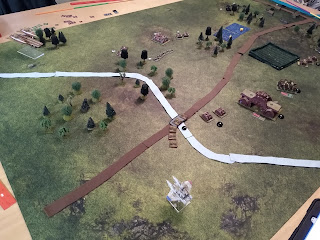 A view from the other end of the table. 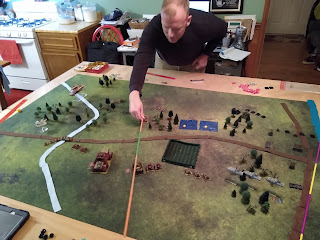 Ziggy decided his Rarog landship should empty the tubes into my Liege-class and checks the range. 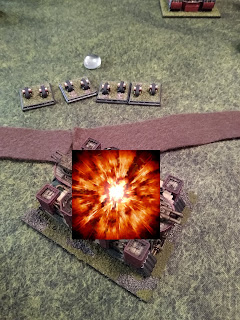 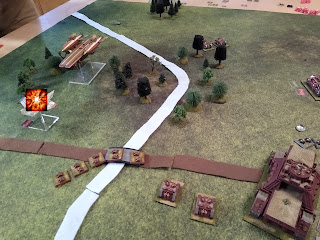 Turn 2 was a bad time for the French, as they lost their big bomber moments later. Mon Dieu! 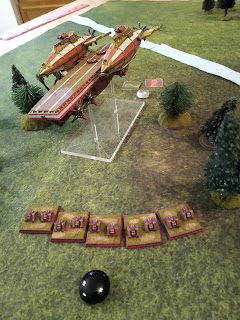 I got a bit of feel-good, but ultimately worthless revenge moments later by having my light tank squadron blast the airship. They caused solid damage, but it would be the only damage done to the monster for the rest of the game. That volley and their presence would have been better used in the center. Oh well. 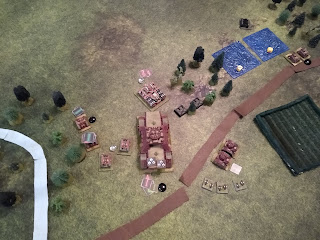 The photography became less regular as the battle ground on. I parked my landship carrier in front of the Polish landship and blasted away. Fortune was not with me as many shots simply tore holes in the earth instead of the steel beast straight ahead! 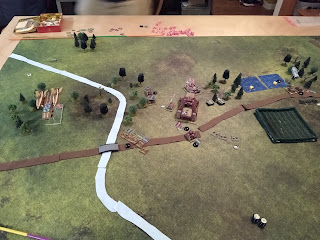 The center continued to devolve into a real mosh pit. Polish flame attacks caused quite a few "disruption" hits which become real hits after a short time if they aren't dealt with. Boarding actions we undertaken by both sides with generally poor results all around. 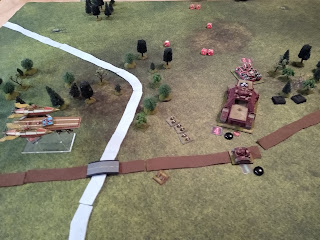 Turn 4 - almost done! The center has thinned out a lot. Ziggy parked his light tanks behind my carrier for a coup de grâce. Would they get it? 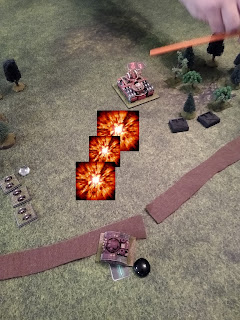 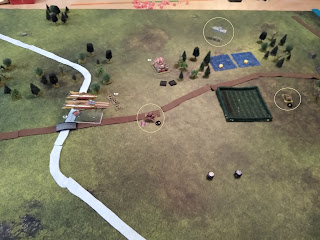 After four turns I only have three things left. The Polish took a real beating too, but of course still had their two big vehicles left and I had three mediums that wouldn't have given them much resistance.

Final score - 44 to 35. Actually closer than I expected and the carrier that blew up at the end was worth 9 points.

It was great to have these minis on the table once again. They're beautiful models and DWFA is a solid, fun set of rules. As it turns out, this game was very similar to a game we played three years ago with almost the same forces! That game was played with the regular Dystopian Wars rules but otherwise was very similar (and with similar sad results for me!).

I hope everyone's having a good New Year. I know I've been silent on the blogging front lately. I've been busy with other things and there's been precious little gaming. Zig and I did play four or five games of C&C:A a couple weekends ago and had a blast.

Be well and good gaming!
Posted by Ski at 9:17 AM No comments: