The Crazies from the Coast

A few more 15mm models for the collection here. I picked up some cultists and related critters from Khurasan recently. They'll be a fine addition to the X-Files repertoire. 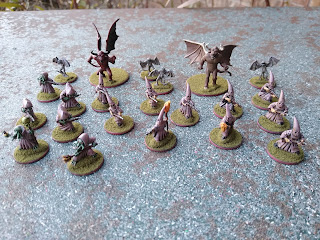 That's ten humans in cloaks, including a leader and six mutants including a leader. Obviously there's some Cthulhu inspiration there. With them are four winged beasts and two very large demons. Summoning a demon should be a scenario objective for these nutbags and something for the "good guys" to prevent. These were fun models to paint and as soon as I nail down a good story-driven scenario, we'll have them on the table.

X-Wing came was selected as the Saturday evening "game of the week" this weekend. Ziggy used a new Rebel list while I pulled out a Republic squadron I'd used before. 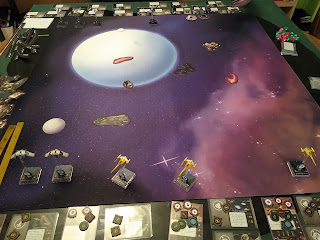 This Republic group is nearly a swarm. I reckon you need 6 or more for a proper swarm. Three Naboo Starfighters and two V-19s. All unnamed schlubs with topedoes and missiles. It's a decent and very fun group, but certainly fragile with a total of 25 hit points and Agility 2 all around. Pilot Skill 2 on all ships is another red flag. 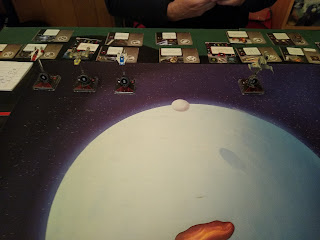 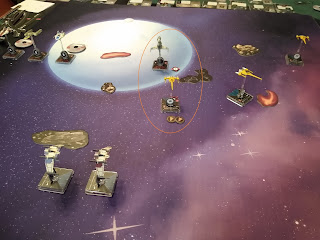 The B-Wing goes full "joust-mode" and lines up on a Starfighter from the get-go. My ship gets hammered and gets saddled with two Jam tokens. In retaliation, the B-Wing eats two Plasma Torpedoes and its plentiful shields are quickly dropped. 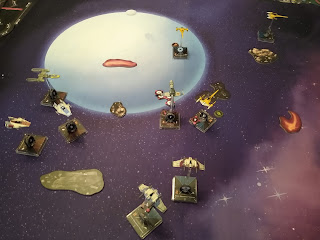 The B-Wing quickly reverses its course and lines up a second shot on my damaged Naboo fighter. My ship is destroyed, and amazingly all the other seemingly easy shot opportunities from my other units at the B-Wing are fruitless. Gah! All that work to eliminate the best ship in the enemy group before the rest of the posse got in position, wasted.

Ol' number 17 (my right flanker) managed to catch up with that troublemaker a moment later and put him out to pasture. Elsewhere, the A-Wings caught up with one of the V-19s. Miraculously, my ship survived the barrage of rockets and blaster fire. 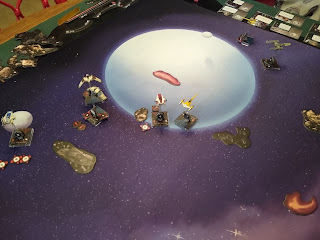 We them had a good old-fashioned twisty-turney for a while. One of my Naboo pilots chased the Y-Wing from a safe distance. The Y-Wing was equipped with an Ion Cannon Turret which was only effective out to medium range. I didn't get pictures of it, but the Y-Wing had dropped two Proton bombs, both of which had been terrifically placed and causing damage to my ships. 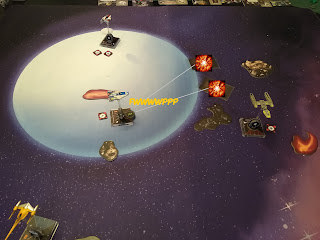 Moments later, one of the A-Wings fires its last Cluster Missile, catching a V-19 and Starfighter and destroying both! Curses! Those rotten Cluster Missiles had done nothing but disappoint Ziggy all evening and the very last one he had made it all back in one shot. 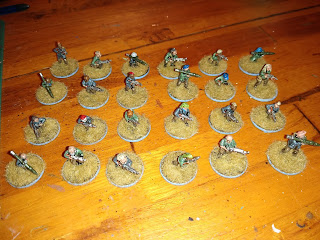 Tank You Very Much

Back in November I picked up a few additions to the 1/72 tank collection. I assembled and base coated them and then they sat for many weeks. I finished them up a week or so ago, and now I present you with two Panzer IIIJs and an Elefant! 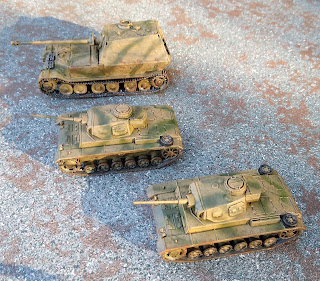 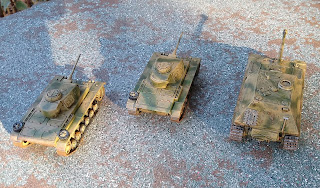 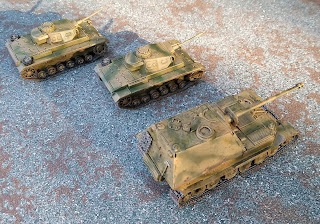 The green striping was done with the airbrush. It's definitely a skill I need to continue to work on. Keeping a consistent line width is not super duper easy, especially when you need to paint quick, short lines. Some black and white crosses and vehicle numbers might show up one of these days. The Panzer IIIs are from Armourfast, a two-model box. The models went together very quickly and easily. The Elefant, on the other hand, was a Trumpeter model kit and required considerable time and effort to assemble. It came with the rubber tracks that we all know and love. They'll be fine additions to the battlefield.

Ziggy and I got in a round of X-Wing last evening. I'd gotten around to picking up the Rebel Conversion Kit a couple weeks ago so I was excited to try out some different ships and combos. The group I used was this: 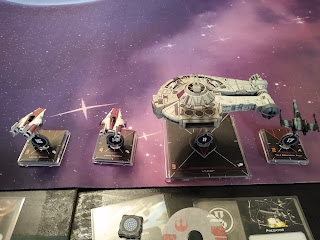 The YT-2400 used to be a poor-man's Falcon, now in 2.0 it's a whole different ship. It's guns are tied for the strongest in the game and its maneuver dial is excellent. Two very maneuverable A-Wings and a "point filler" Headhunter borrowed from my Scum and Villainy squadron rounded things out. 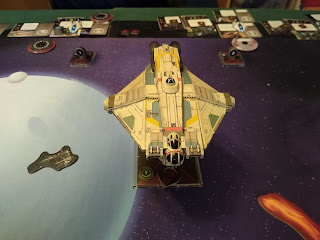 Ziggy's group was oddly similar - a Ghost escorted by two A-Wings! He also had a Sheathipede utility shuttle docked in the Ghost.

The engagement was a great twisty-turney, especially with the flock of nimble A-Wings. The big ships spent an lot of time running over obstacles and getting in their own way. They were still threatening enough to keep the little buys wary and away. 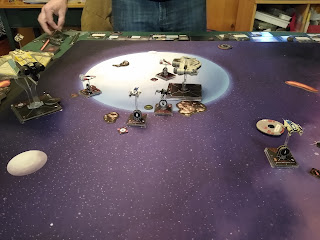 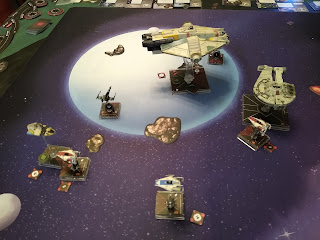 After a while though, I did manage to kill of the shuttle and one A-Wing, while Z had gotten one of my A-Wings. The final turned ended up like this with his remaining small(the blue one)  headed towards my group. 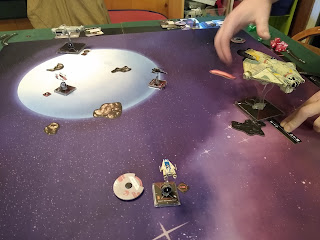 Some fortune and a bit of Boost resulted in my A-Wing and Headhunter finishing off their target. 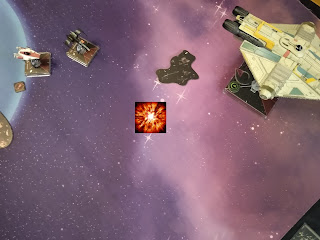 We called the game there. It had been hard-fought and there were plenty of amusing and dramatic moments. The A-Wing is an excellent "gnat" and will be back for sure. We were both impressed by it - you just have to learn how to drive it properly. Flank, arc dodge, use obstacles and overall, just DON'T GET HIT!
Posted by Ski at 8:35 AM No comments: