Tanks for the Memories

I put together some new tanks for the 1/72 and 1/76 collection this week. I'm planning to use them in our planned Memorial Day game at the end of May. A bit of Barbarossa in the works. 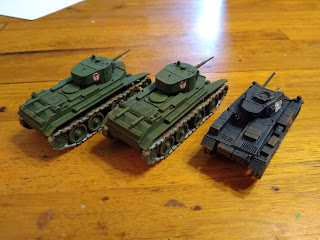 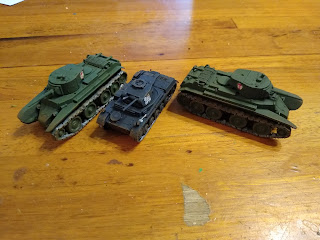 That's two Pegasus BT-7s and a Revell Panzer IIF. They went together easily and the paint is just a quick splash and go. Nothing fancy, they're toys for the tabletop. I was hoping to playtest the scenario tomorrow but that got goofed up by some garbled plans with my wife's family. Burgers, beer and board games will be a lot more likely. Y'all be well!

Batman and Robin and The Rest

Last Saturday the Dynamic Duo got a bit of table time in a four-player game of Batman Miniatures. I arranged a game with Mark, Wayne and Ziggy featuring the Riddler's gang and the Falcone crime family fighting it out with a bevy of caped crusaders.

I ran the Riddler crew and Mark was my accomplice using the Falcone gang. Wayne took Bats and The Boy Wonder while Ziggy used Batwoman, Katana and Green Arrow. 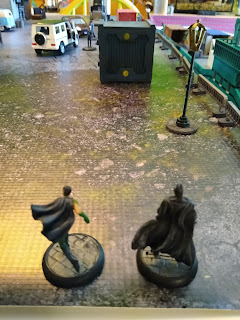 Two of our heroes plan their moves. 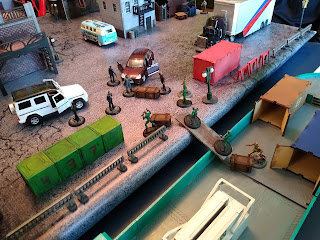 Riddler and his boys unload a special shipment and deliver it to the Falcones. 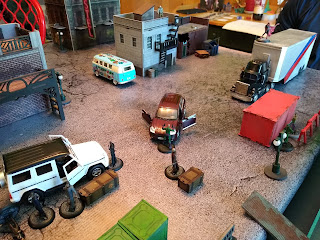 From the darkness an arrow strikes Quelle! She's knocked down. The busy criminals quickly look for cover from whatever's out there. 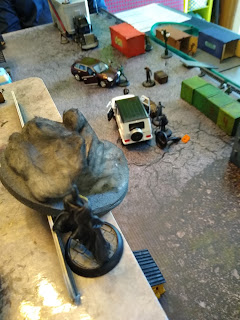 A well-aimed Batarang puts young Alberto Falcone on his back as the Dark Knight makes his way to safety. Some smoke won't hurt either! 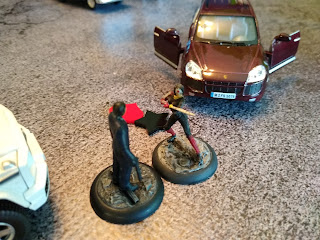 Katana rushes in and begins fighting with Carmine's bodyguard, Sam. 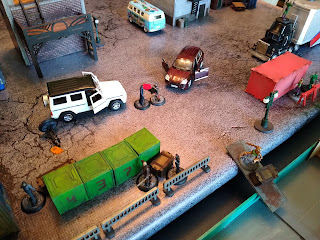 The Falcone boys and a Riddler bot keep moving crates as the rest of the crew try to figure out what to do. 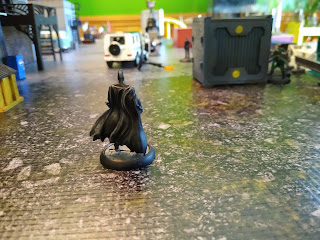 The heroic man of action has been on the sidelines too long! 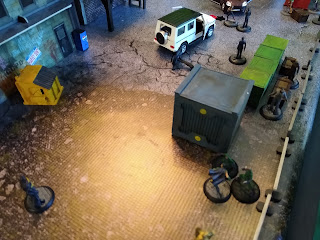 But the Boy Wonder beats him to the finish line! Robin takes down one of Riddler's goons. Down, but not out. 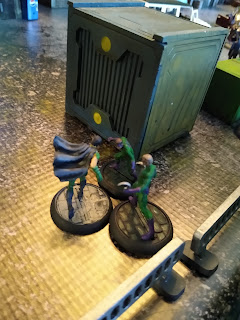 "Knuckles" gets back on his feet to teach this former circus act a lesson. 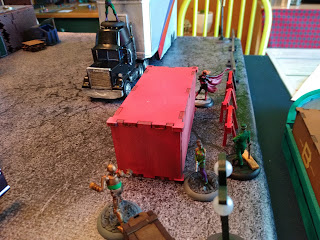 Kate Kane, who's been propping up the far side by herself, drops down and points a finger at Riddler. Riddler's no dummy! He and Quelle aren't going to give that psychopath the satisfaction! "Alexander! Show her who's boss!" yells Edward to his lieutenant atop the truck. 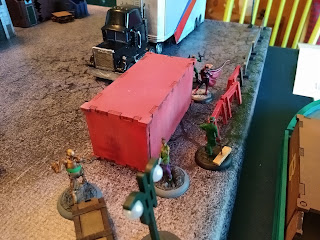 He happily obliges of course! 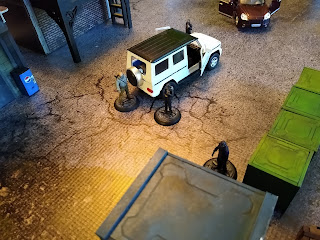 Oliver Queen has slowly made his way to the center and steadily grinds through the Falcone gang one at a time. Not a good time to get caught at the docks!

And then I stopped taking pictures for whatever reason.

But at the end of the night, the Falcone's managed to pull one crate off the map and the Riddler Bot still had control of another. A victory for the crooks, but not resounding by any means.

I think Wayne could have been more aggressive with Batman. He's a really tough cookie and the bums he was facing were schlubs. Granted, Mark and I would probably have run off like scared rats, but the heroes might have been able to control the narrative. As it was, they gave us the opportunity to hole up, get a plan set and take advantage of the situation late.

Nevertheless, BMG again proves to be an excellent skirmish game that's tactically deep and remarkably entertaining. For any of you curious, we're still using the second edition rules. The third edition rules, although free, are a substantial departure from the prior versions and Wayne and I aren't keen to change for change's sake.

Good morning readers! A short update on goings-on from the past fortnight. Last weekend Mark and I played a game of Stardust: Ground, my company-level sci-fi game. This battle featured blatant GW-lifted Space Marines fighting against the Robot Army who are a far cry from their GW corollary. 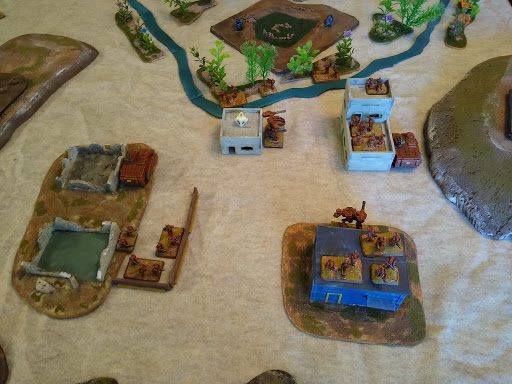 Pre-game. The Marines were deployed in the center of the battlefield, the robots entering from all four corners. The 'Bots launched their attack at night, giving them a real shooting range advantage. 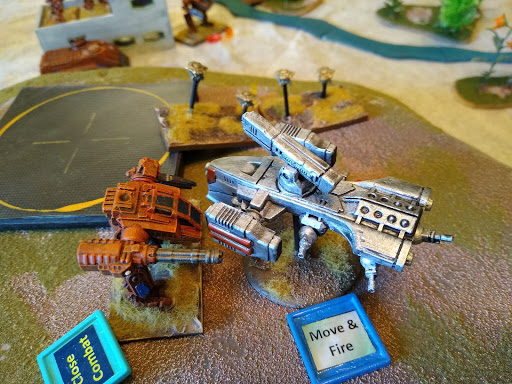 The only bright spot for the Marines during the early going was one of the Dreadnoughts who was rather effective smashing up Robots in close combat. 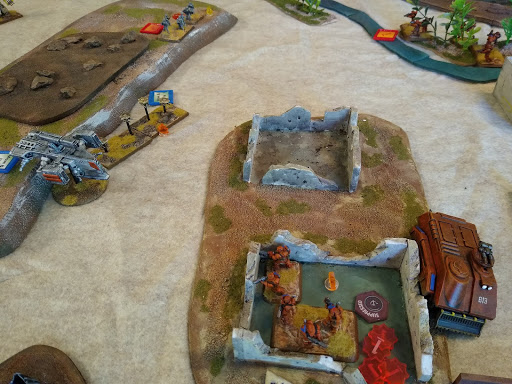 The mechanical menace just dumped an amazing amount of firepower on the superhumans; Marine armor proved to be up to the task, reducing casualties to an acceptable level, though the 'Bots were still firmly in control.

Once the sun came out though, things turned into a real blood and silicon-bath. Initially, the Marines took an massive beating and things were looking very grim, but then I was able to get a couple units into close-combat with the Robot troops.

The close combat didn't go quite as well as I'd hoped but it was rather disruptive and broke up the 'Bots attack quite nicely as they were forced to move, hide and otherwise get themselves into a worse position. 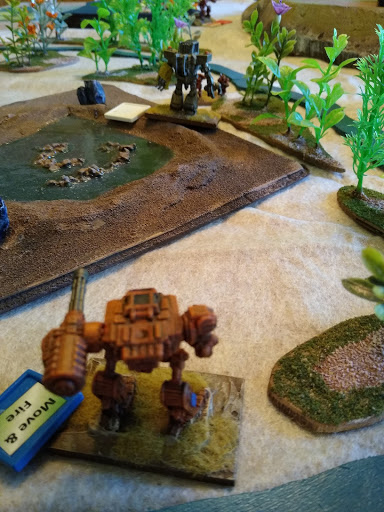 The last shot of the game... a Marine Dreadnought's cannon rips into a RepairBot's back armor.

It was a bloody, closely-fought affair that we both really enjoyed.

In other news, I ordered this beauty last week: 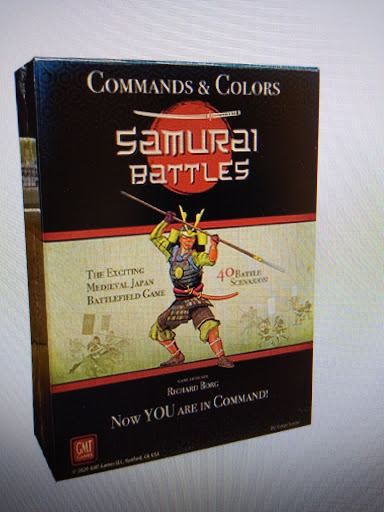 It showed up in short order and I got in a first game last evening with Ziggy. 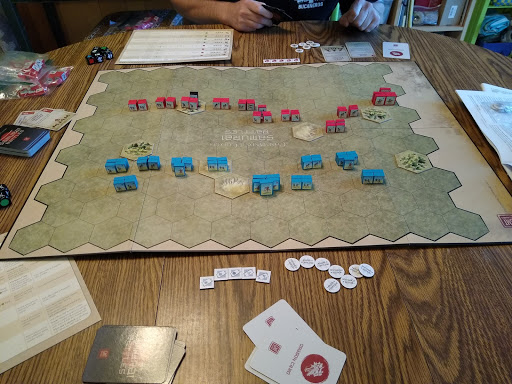 Now I don't have exhaustive  C&C experience like some of you, but I have to say, Samurai Battles didn't disappoint. It's of course a familiar experience but with plenty of tweaks and additions to give it a much different feel from Ancients and Medieval. Very happy with this addition to the collection.