Finished up a few more 1/72 Germans for CoC. There were plenty of unused guys on the sprues, now recruited to be an Aufklarungs team, a Panzerschreck team and a Panzerknacker team. 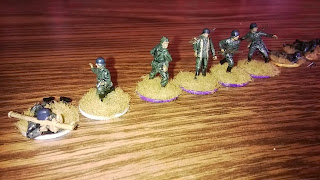 White base edges are the 'Schrecks, purple is the 'Knacker team of a smoke grenade guy, bomb guy and LMG pair. 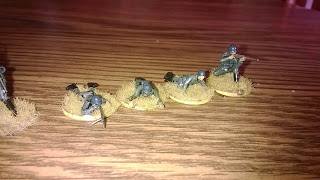 The recon team is two riflemen and an LMG pair. Yes, that MG42 can indeed fire around corners.

Some seriously back-ordered goodies showed up today. A 1/300 Harrier for MSH and my first 1/6000 ships. Man are they tiny. Hooray new stuff!
Posted by Ski at 5:02 PM No comments:

Email ThisBlogThis!Share to TwitterShare to FacebookShare to Pinterest
Labels: 1/72, Chain of Command, WW2

Ziggy and I got an opportunity to try out Chain of Command Friday evening. Like many games, the first go-round is always a bit slow and stumbly, but by the end we had a pretty good grip on the rules and how things flow. We used my freshly-minted 1/72 Germans and Soviets - Zig using the Wehrmacht of course any me herding the red horde. The Germans were a full platoon of three squads and the platoon HQ team. The Ruskies were a platoon of three squads (one missing its LMG) and the platoon leader. We didn't fiddle with any of the support elements for our first game so I was at a minor disadvantage with much less flexible elements. 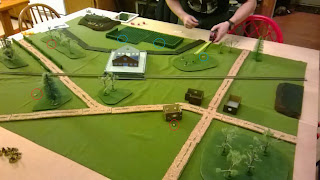 We muddled our way through the Patrol Phase and got our jump-off point positioned. I could tell that the Germans were trying to get holed up in the train station so I positioned my entry points to surround it. 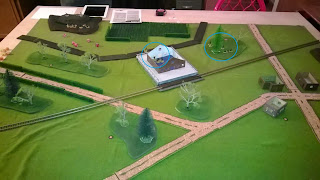 With typical German efficiency, two full squads are deployed - one gets moved up into the train station. My activation dice for my first phase was tragic and I couldn't get anything onto the table (6,5,5,4,1). Ziggy's second activation roll ended the turn. The table was now set - the Germans had captured the train station and my mission would be to dislodge them. 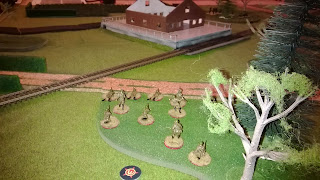 My first squad arrives and takes up a position to pour bullets into the station. 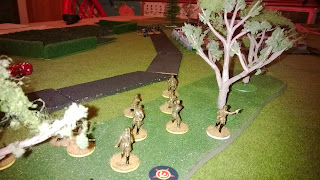 And then the second, which straight away begins firing into the third German squad on the road. Basically unlimited weapon ranges (except sidearms, submachineguns and flame-throwers) mean that if you can be seen, you can be hit. I managed to roll two 6es on the activation dice to start my phase which would give me two phases in a row. 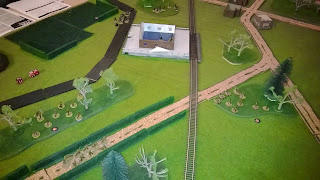 That same squad blasted away at the guys on the road again and my third squad arrived on the road, concealed by the hedges. 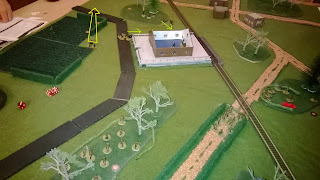 Unterfeldwebel Zeigler had to re-arrange his forces to stay in the battle at this point. The MG team was forced to break and ended up behind the hedge. The rifle team managed to get out of danger around the corner of the station. The squad in the train station kept firing at my guys in the woods (far right in the picture). 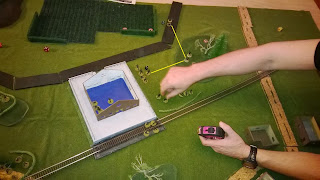 The German platoon leader got in position to help both shot up teams recover while the squad which hadn't seen much action yet moved up and assumed a tactical stance, gaining some survivability while advancing. (We put the green yarn on units in a "tactical stance")

A moment later, the guys in the train station found their mark and unloaded on first squad in the woods, causing them to break - right off the table. 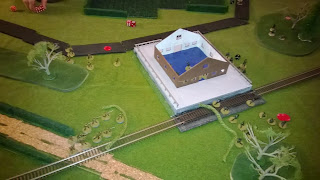 Without much in the way of good options, I decided to rush the station. A miserable movement roll by second squad left them with their asses in the wind. Some top-notch shooting later and they were routed along with my senior leader. Third squad was still in OK shape, in a tactical stance and still approaching the station. The turn ended but I got to keep initiative. Tactical markers, etc. got pulled off. Turn three was going to be a bloody mess.

In an effort to give close combat a try, I hurled my squad towards the Germans on the tracks. A swirl of blood and trenching tools later, I had kicked the shit out of the Germans and run them off. You can see the hand of fate reaching for shock counters in the last picture.

It didn't take long for the remaining Germans to blast my remaining squad into oblivion and we called the game there.

Well that was fun. Small wonder that Chain of Command is what all the smart kids are playing. The game is tight, has a very nice ebb and flow and just works. The dice mechanics are simple and consistent from one rule to the next. Close combat was simple to manage. Some additional teams would make things a bit more interesting. As it was, we were both typically getting enough actions to do everything we wanted. With more teams per side, there would be some tougher decisions about which teams to activate. CoC, after a first game, gets two thumbs up from Z and myself.
Posted by Ski at 10:06 AM No comments:

A Game, on a Gaming Blog?

It's been a while since I posted an AAR, mostly because it has been while since I got to sling dice. The stars aligned for Saturday so Zig and I played a games of Dystopian Wars. It was a sort of a rematch of our previous game, Z brought the British Airmada and I used a primarily Blazing Sun surface fleet but also fielded my two War Gyros since neither had gotten any table time. Actually, I ended up using everything that came in the recently released fleet upgrade box set just to see how it handled. The fleets were 1000 points and I'll be the first to say we're a bit fast and loose with the rules as written. Z and I do not play games to sit at the table and read nuanced paragraphs from a rulebook.

For victory conditions, Zig rolled a "5" so he had to destroy 50% of my fleet including all small models. I rolled a "6" (setting a trend) and was tasked with capturing his flagship which he'd already decided was his aircraft carrier. 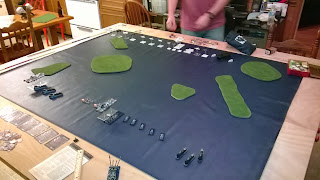 The table and our setups. 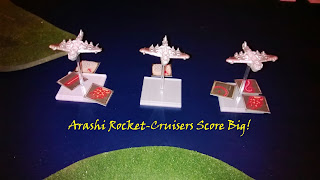 Right from the get-go, my dice were hot. My first volleys from the new Arashi support cruisers were nasty. 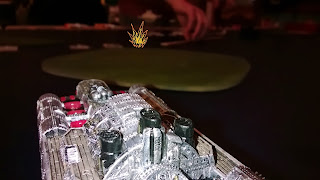 War Gyro 1 finishes the job on one of the Doncasters. 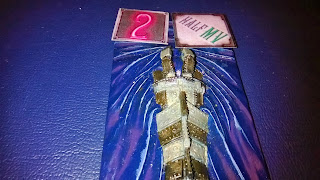 My Ika eats a well-aimed torpedo volley from another flight of Doncasters. Grr. 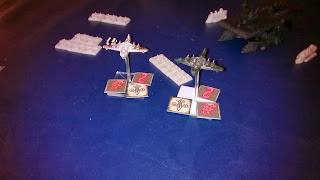 Vengeance arrives in the form of rockets and gunfire. 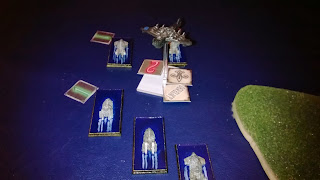 A bit more violence later and one of the planes is destroyed, the other is derelicted by my little squidbots.

The next turn, War Gyro 2 (the new one) moves forward and amongst other things, shoots its big gun at the British carrier. A crit is scored!

The carrier explodes and takes its escorts with it. It was the first game for that ship and the first time it was shot at. Without trying to be too rude, hahahahahahaha. 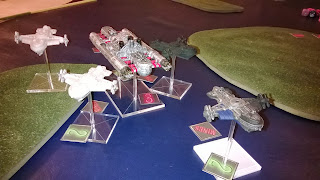 To avenge their loss, the Brits send their Hawk scout rotors forward to surround War Gyro 1 with mines, then board and capture it. I did manage to kill an amazing 11 of the 20 boarding parties with a measly 4 AA dice. Like I said, my dice we in fuego. 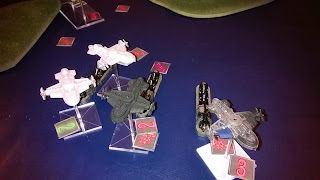 The ungainly Hawks continued their reign of terror on my right by swarming the new rocket cruisers, causing a great deal of damage with their guns and bombs, and littering the path ahead of the cruisers with mines.

But a later in the fourth turn, the two remaining behemoths met over a small island. Boarding parties flew back and forth but the British Marines could not capture the Japanese battleship. Japanese fighters swooped in at the end and managed to finish off the huge British airship, ending the game well and good.

Well, that was ugly. I crushed Zig's Brits handily. Zig captured the one war gyro and killed a small sub robot. That was it. I killed his carrier, war gyro, 5 Doncasters, and 3 Merlins. I think the British fliers are simply a terrible match-up when pitted against Blazing Suns ships. The long range strength of the EBS, unhindered by LOS restrictions, is just plain nasty. We'll change things up a bit next time around - Z needs to get his boats back in the water.

Good Gaming!
Posted by Ski at 8:13 AM No comments:

Some more painting on the ol' blog this week. This time it is 1/72 plastic WW2 guys! Something completely different for me, that's for sure. I picked up TFL's Chain of Command a few weeks ago and got these guys to go along with it. I've got more bodies on order, since there weren't enough basic riflemen, etc to fill out three squads. The painting style is a lot more spartan than I usually do. I've painted loads of Soviet riflemen and Nazi grenadiers in my day and I just wasn't to go bonkers detailing their uniforms and equipment this time around. Basic block painting + magic wash resulted in fine looking tabletop toy soldiers. 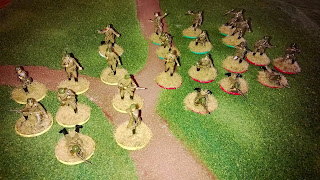 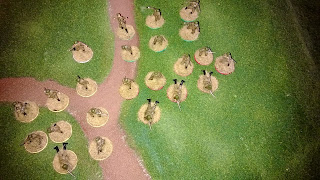 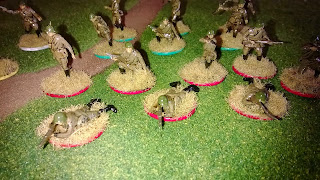 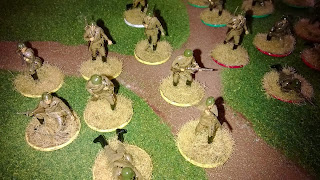 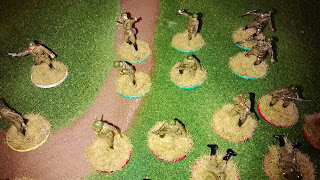 I've got a mortar, MMG and crews on the table now. 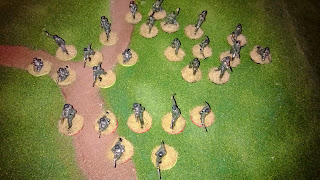 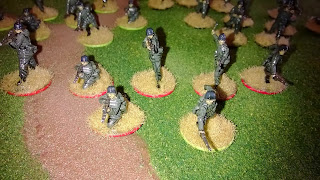 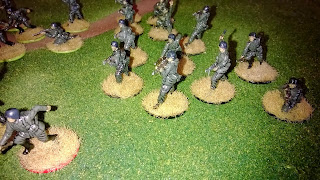 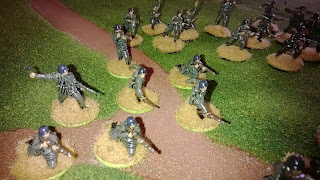 The Germans have two LMGs in the queue.

German figures are from Revell. Ruskies are Airfix.
Posted by Ski at 4:20 PM 2 comments:

Email ThisBlogThis!Share to TwitterShare to FacebookShare to Pinterest
Labels: 1/72, Chain of Command, WW2

Waiting for the worms

I painted up a score of 15mm space alien worms over the weekend for use in Swatters, MDRG or whatever other game seems appropriate. Here they are in all their helminthic glory. Minis are from Rebel Minis, mounted to pennies. 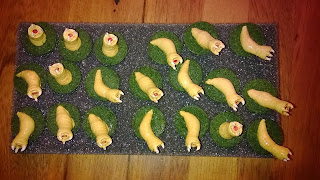 I'll leave you with a little something to consider until my next post... 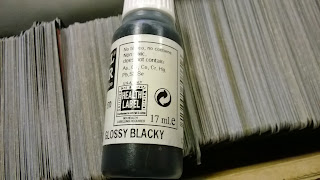 Email ThisBlogThis!Share to TwitterShare to FacebookShare to Pinterest
Labels: Aliens

I've been painting a bit this week but not much gaming. Junior and I did try out Anima Tactics last Saturday. We didn't get to finish our game but we both enjoyed it. I don't know if I'll be able to get in a re-match this weekend, we've got a lot of family stuff planned and Sunday is supposed to be more Wings of War at Morningstar.

Mike mentioned that Gnomecon is organizing a one day mini-con in November. More details as I get them. I'm going to try to run a game or two of Swatters.

I'll post an AAR for WoW or whatever I end up playing Sunday. Be well!
Posted by Ski at 11:19 AM No comments: