I was able to complete the 18-wheeler more or less to my satisfaction yesterday. The only thing I'd really like to add is lettering, but that really could be done at any time. 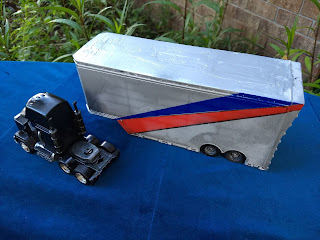 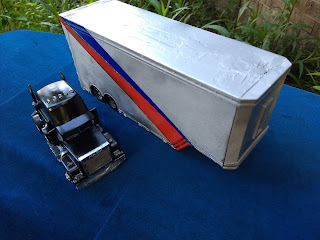 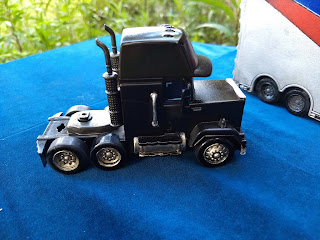 At least it's not an advertisement for the Cars movie any longer. Scale-wise, it's pretty close. 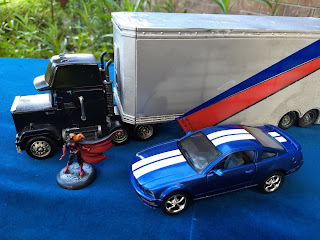 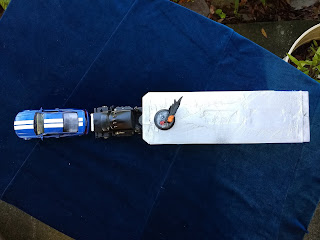 It certainly doesn't look wildly out of place next to one of my cars, or the characters. The cab is certainly too narrow, but it'll do. If I'd been more enterprising I'd have done something with the trailer's back door. Out of the box, it's a flip-down to allow a car to drive up and in. I considered removing it and replacing it with more traditional swing-open doors but it seemed like a bit more work than I wanted to do.

Email ThisBlogThis!Share to TwitterShare to FacebookShare to Pinterest
Labels: Batman

Truckin, Got My Chips Cashed In...

It's been slow around here lately. I got in a short game of X-Wing with Zig last weekend. Didn't take any pictures other than one when we first set up. 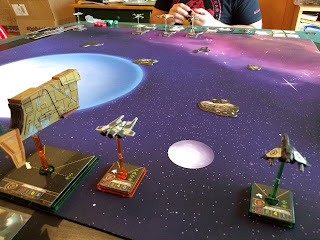 It was my first time driving the Houndstooth. Other than the terrible turn radius, I really liked it. I won the game handily thanks to very poor dice rolls from my opponent.

While at Wal Mart last weekend, I spotted and picked this up for Batman. 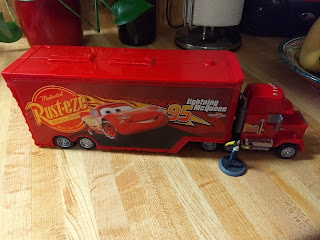 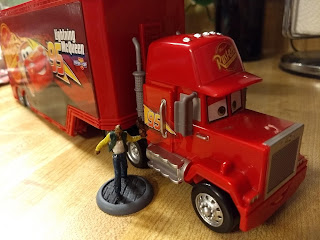 It's pretty close, scale-wise. I figured it would make great street scenery.

The top of the trailer had some lumps and bumps that I cut out and flattened. 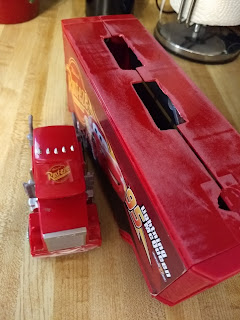 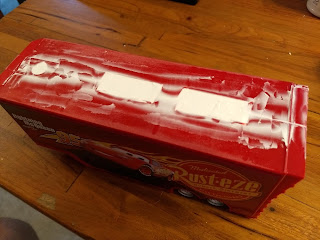 So now it's primed black and in the "to be worked on" queue. The trailer is a bit too wide compared to the truck, but given that it's a cartoon-based toy, it's to be expected. It's got interesting scenario possibilities - I'm excited about this pickup.
Posted by Ski at 1:03 PM No comments:

Ziggy and I played a quick game of CY6:JA on Saturday evening. The scenario I selected was Recon: Escort from the MRB. I ended up with the South African forces - two Mirage F.1s escorting a Canberra which was on a reconnaissance mission in Angolan airspace. Ziggy had two Angolan/Cuban MiG-21 interceptors.


So, our fighters got close and began the twisty-turn. My wingman took a rather optimistic long-range gun shot at Ziggy's flight leader and scored a hit resulting in airframe damage.

Desperate to make something happed, Ziggy attempted an extreme maneuver with his lead plane. The airframe damage forced a pilot skill check which he failed. The Fishbed went out of control and plummeted into the scrub below. A moment later, our planes were positioned as shown above. The Mig missed its gunshot, while my lead (with the blue base) connected with his gunshot. Again, airframe damage was the result.

Ziggy was ready to call the game, but he actually had a good line on the Canberra at this point and we played one final turn to see if he could salvage it.

He took a gun shot from 5 hexes and jammed the guns! He hit the afterburners and bugged out.

That was the first time Z has ever not won a game of CY6. It was also the first time he'd flown Warsaw Pact equipment, not that that would have made an ounce of difference. His Migs were better in all regards to the Mirages I was flying. It's better to be lucky than good and yesterday I had the luck.
Posted by Ski at 11:38 AM No comments:

Last Saturday my wife an I played an intro game of Batman. Taking the lessons learned from our big Memorial Day games, I made sure to keep things lean and was sure to deploy as many light sources as I could muster.

I spent a few minutes explaining basic concepts and we got underway. BMG is one of those games that's a bit of a headscratcher to read, but once you see it in action it makes so much sense.

My wife used the law-dogs - Rick Flag, Carrie Kelley and a Son of Batman (the shotgun guy). I used a trio of crooks including Cap'n Boomerang, Slipknot and Quelle. We each place two objectives and our mission was to simply accrue victory points until six turns had expired. 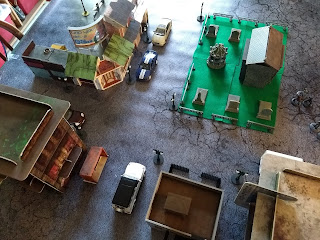 The intersection that would be our battlefield. The graveyard is new - it's a Plastcraft Malifaux piece which included the Mausoleum and the five graves. I need a good wrought-iron fence for it. I've also picked up a couple extra cars since the last outing (the Mustang and G-class). 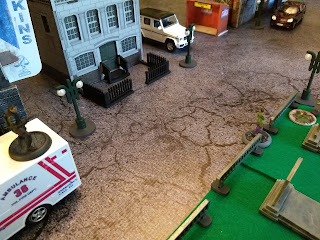 Slipknot and Quelle make good progress towards my closest objective. As poor of a showing as Slipknot had in the Suicide Squad movie, he's terribly useful in BMG with ridiculously good mobility. 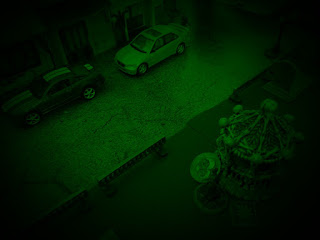 Quelle posts up at the Gazebo and is fortunate that Rick Flag doesn't have any night-vision gear. 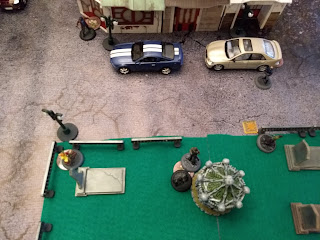 The action heats up - Boomerang and Robin swap objectives, Rick charges at Slipknot to deny me the Gazebo objective, and Quelle takes a shot at shotgun boy. 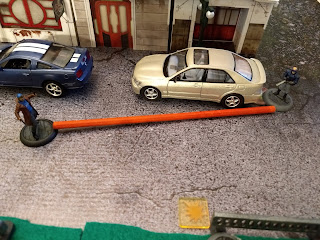 CB hustles over and tosses one of his trick boomerangs at the shotgun guy. With a satisfying "whump," it connects with the back of the thug's head and knocks him out. One down! 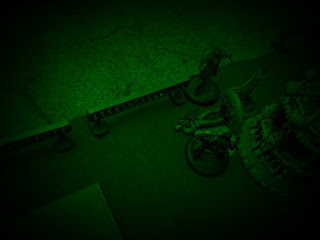 With the sound of sirens in the background, my band of crooks all rush Rick, overwhelming him. We rounded up the loot and made for the shadows as Carrie and Rick were left wondering what the heck had gone wrong?

We both enjoyed the game quite a lot. Rick Flag would have been more useful if he had a group of shlubs to lead - most of his special abilities involve improving his teammates. Perhaps I should have swapped him out for Black Canary for this game since she's more of a straight-ahead solo. Either way, I think there will be more Batman in the future for us - it's good to find a miniatures game that the little lady approves of. 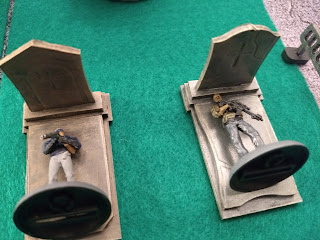 Someone thought it was funny to use the graves for their intended purpose.

I've made some good progress on the 1/600 scale Arab-Israeli War collection in recent weeks. I want to give them a go using Cold War Commander. Getting a game put together hasn't really been at the top of the agenda, but buying shinies and adding to the collection is always in fashion. 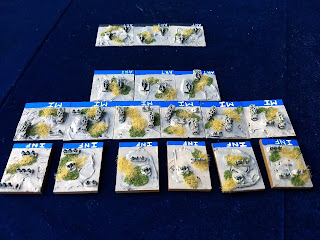 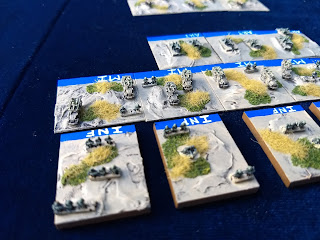 The infantry is on oddball bases - they're not really necessary for MSH and CWC isn't terribly sensitive about base sizing. They're still 1.25" deep like everything else. 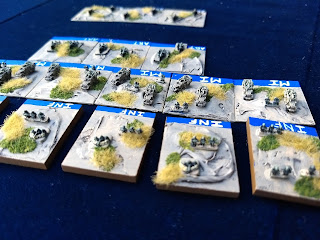 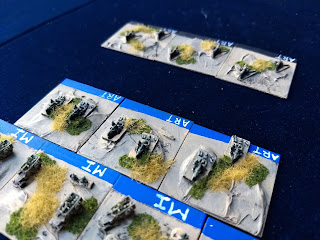 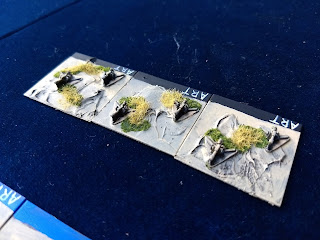 Arab (Egyptian or Syrian, you pick 'em) D-30s. Or course, they can stand in for darn near anything.

I've got Arab infantry in the queue and may put together a group of BTR152s since the BMPs are pretty high-end equipment for 1973.
Posted by Ski at 7:47 PM No comments:

The Space Cadets re-assembled in Brunswick last Sunday for a bit of the 'ol SFB. The scenario of my design featured three Orion LR+ trying to load up with loot while dealing with a passing Tholian flotilla that had responded to the distress calls.

We had six players this month - me David and Mike as well as Max, Caleb and Mike's son Anson. Ships were randomly assigned and interestingly, all three of the veteran players ended up on the Tholian side while the trainees commanded the Orions.

All three LRs were identical with a single Distruptor-22 in the A position and two C-racks in the wings. Drones were speed 32. 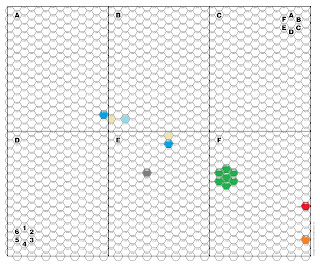 The setup map. The Orions are in the blue hexes. The BW is in the red and my PFs are in the orange hex. The green blob is a planet and the gray hex is a moon. The bone hexes contain wrecked ships that the Orions must retrieve 10 loot from before leaving. 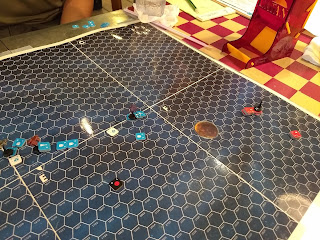 We join the action. The Orions started lobbing drones early. We Tholians countered this volley by crossing our paths behind the planet, forcing the drones to lose tracking. 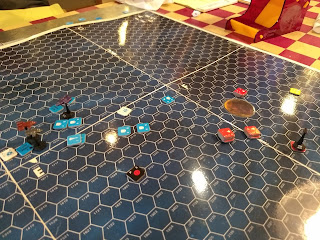 Reasonably sure this was the end of Turn 1. On turn 2, I really hit the gas to go "catch me a pah-rit!" 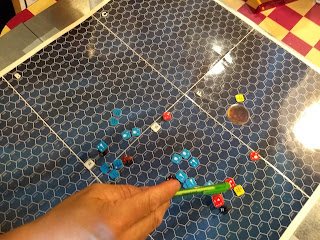 I was pleased to see most of the drones get targeted at the carrier / fighters. I traded shots with Max in the red LR. The other pirates also took some long range shots at my flotilla and one of my PFs suffered some serious internals.The carrier and fighters were able to handle the drones with few problems, although one Spider III did succumb! 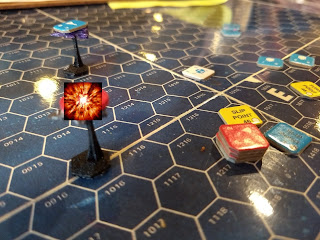 To start turn 3, we had to figure out how to keep the Orions from getting away with the loot. I had pulled up right behind Anson's ship by the end of turn 2 - it was simply the easiest to get close to. I overloaded the disruptors I had left (having lost two on ship #3 earlier) . One alpha-strike later, the LR suffered 49 internals. It blew up. 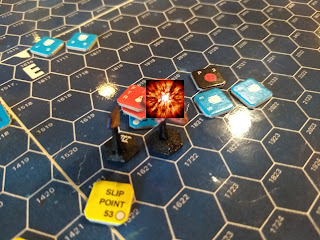 A few impulses later, David got most of his squadron to range-0 of Max's ship. Predictably, 11 phaser-3s did what 11 phaser-3s do. Max's LR was toast, but amusingly wiped out the Spider IIIs in return and severely damaged the Spider IIs.

Caleb got out with as much loot as he could carry, with a clean sheet! A good individual effort, but overall, the Tholians won handily. We discussed Orion options and they probably should have held all their drone launches until we'd cleared the planet and they'd have done well to get positioned at the end of turn 1 to make a mad dash to start turn 2. I was surprised that David elected to launch his fighters so early, but the Orions were traveling slowly and it ended up working out OK for us - I was worried they'd get left in the dust. I was quite happy with the Tholian PFs' performance. They're good ships that were well-suited to this kind of low-end encounter.
Posted by Ski at 5:25 PM No comments: