Not a whole lot of gaming going on here lately, but it's ramping up a bit. I got in two games of X-Wing with Zig today, trying out some new ships and generally having a good time. He used Imperials for both games - centered around the new Alpha-class Starwing. It's powerful and a real pain to fight. In the first game I used Scum - a pair of Starvipers, a Quadjumper and a Z-95. It was a fun group but the QJ just seemed "lacking," but for under 20 points, I guess that's to be expected. 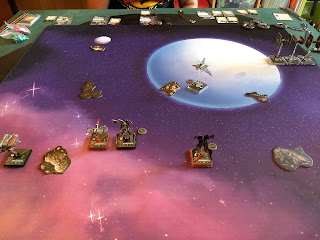 I won by a hair. Flew the blasted QJ off the map accidentally.

After dinner I put together a new list entirely and Ziggy modified his a bit. I went with Rebels, wanting to fly the bomber once again and excited to try out Sabine's TIE. They were joined by a very basic B-Wing and a souped-up A-Wing. 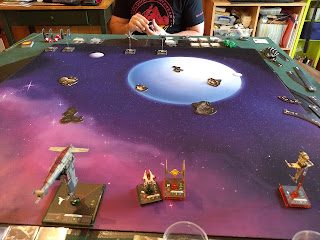 Again, the game was very tight. I got a couple of very fortunate double-damage crits on him early. My bomber and TIE went down, though I was quite happy with the performance of both. 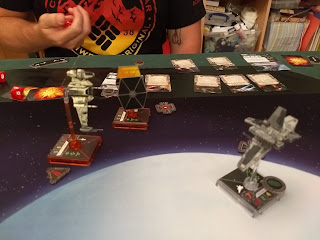 The Starwing about to end Sabine's day.

Another tight game but I did end up victorious!

I painted up some Arab Israeli pico armor during the week and based them up as command stands for CWC. 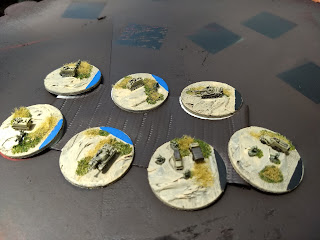 Four for the Israelis and three for the Egyptians. It's a good use for the "leftovers." Maybe they'll get on the table top for a game one of these days. I have some more incoming - I've been in a painting funk recently and these are good models to break the jinx with.

I've been on vacation for the last week. We went up to Helen in north Georgia and had a rather nice time just bumming around. I was very excited to come home to an X-Wing tournament to top it off! The tournament was at Savannah Lions in Pooler. There were eight players including me and David. I took a group of Rebels including Chewbacca in the Falcon, and ARC-170 and a Y-Wing.

My first game was against a fellow named Chris who was flying the Imperial Pizza Delivery Service, featuring three shuttles - the Lambda, Upsilon and Reaper. 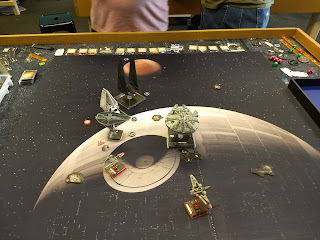 He turned my Y-Wing into dust pretty quickly when I goofed and parked it in front of his full gunline. I continued to work on the Upsilon and managed to take it out, followed quickly by the Lambda which had been engaged in self-harm - Darth Vader had been throwing damage markers on my ships which damages his own ship in the process. In the end, the ARC and Reaper were left in a dogfight with a single hull point each. My ARC got the first shot opportunity and I won the game. Although it was a very tight and enjoyable game, my opponent couldn't bring himself to congratulate me, but rather simply blamed his loss on his own mistakes and poor rolls. What a pill.

My next opponent was Connor, flying the bizarre three U-Wing swarm. We gave each other fits early and the game turned into a real brawl. My ARC170 was his initial target and quickly succumbed to the massed firepower of his U-Wings. While he was doing that  though, I managed to get a couple of Ion tokens on one of his ships, forcing it to fly off the table. WINNING! 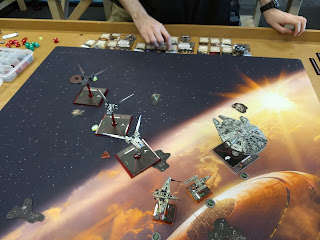 I managed to kill a second U-Wing before being wiped out. At least I made a respectable showing against a very tough opponent.

My third game was against Matt who was pushing around a Shadowcaster and a Punishing One. I didn't get any pictures but had a great time. I had his Punishing One down to a single hull point before my group was wiped out. Matt had one of those magical games where everything he tried worked exactly as intended.

David, who had lost his first two games flying a seven-TIE swarm, won his final game of the day, so he left on a positive note and I was happy to just have gotten a win.

I thought the force composition among the players was unusual - there were no bombers whatsoever and the highly cheesy auto-damage systems were non-existent. Only one player took the Expertise card - probably the shadiest card in the game.
Posted by Ski at 8:18 AM No comments: 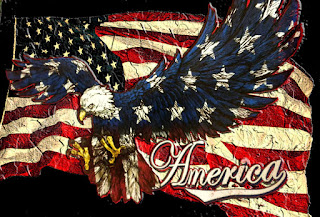 It's Independence Day, woo hoo! A day off in the middle of the week is kind of ridiculous really but hey, a day off is a day off. Any excuse to burn burgers and have a brew is a good one.

I've actually done a fair amount of gaming the last couple of weekend, it's gone undocumented here but I'm about to rectify that. The day after Zig and I played Firestorm a couple of weeks ago, I met David up at Morningstar Games for a Dystopian Wars Fleet Action battle.

I used a fun pairing of Prussians and Eclipse Company mercenaries. David brought along his Blazing Sun Japanese. 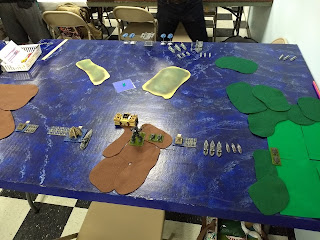 So the general setup was that I was defending a channel and the EBS forces were trying to clear me out and capture the large building in the center (next to the robot). 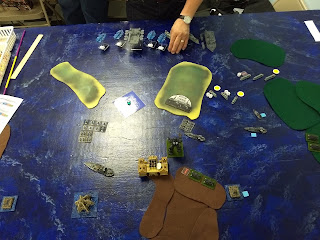 By turn two, it seemed that David wasn't moving quickly enough towards the objective building. I was fine with this. 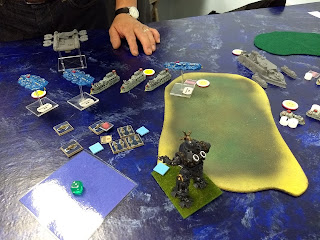 My swarm of little boats and subs drew a massive amount attention and really helped the Prussian cause. While David was expending considerable resources killing the hard-to-hit little guys, I was knocking on his larger, more threatening units. 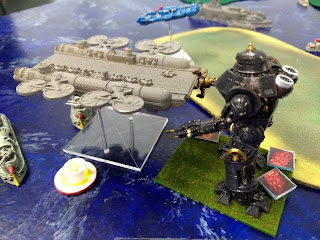 Ol' Stampy gets up close and personal with the Blazing Sun sky fortress. Sadly, I completely botched the attack and did not crush the thing mercilessly.

In the end, it was a solid Prussian victory. My aggressive defense paid off - I took the battle to the enemy a long way from their objective. It felt great to put the DW toys back on the table. They really are a lot of fun.

Last Sunday, Dave and I met again at Morningstar, this time for some X-Wing. David flew a by-the-book TIE swarm - 8 x 12-poit TIES, while I used a Rebel mix including Poe Dameron, and ARC170 and a new Resistance Bomber. 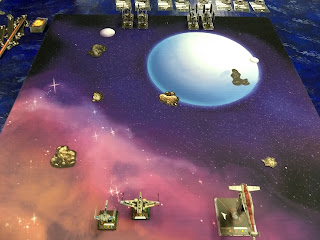 Early into the proceedings I just could make anything happen and I wasn't feeling good about it at all. 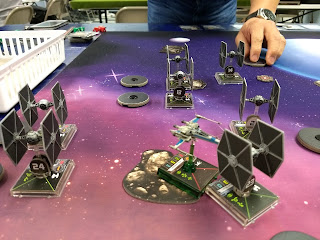 The shot of the week - Poe gathers the attention of seven TIEs. Poor shooting by the Imperials meant that Poe's luck held out. 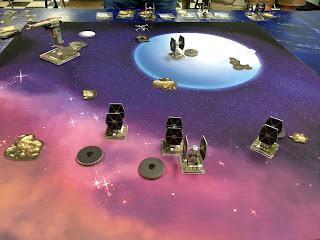 The TIEs at the bottom had finished of the ARC170 while I'd managed to bump off three of the Imperials. Things were starting to fall into place for me. 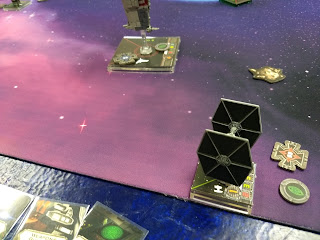 An example of David's fine driving skills. Keeping it on the table like no one's business! 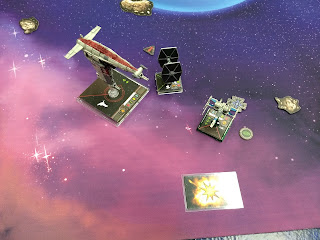 The final result. Poe kills yet another TIE - he turned out to be quite the killing machine - and the Bomber hangs on to its final two hull points. I had managed to kill seven TIE fighters and only lost the ARC170. The Bomber is very nice and a good pickup for the collection. I've been eyeing the Ghost for a while, but I'm glad I went with this ship.

I've been painting a bit recently and have finished up a few things. 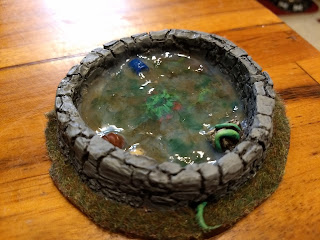 Here's a fun little well / fountain with some creepy crawlies in it.

Another good pickup at Morningstar... 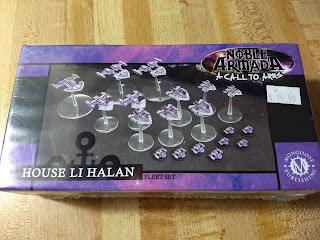 I can't believe Jeff had one of these on the shelf. A very nice pickup for my Red Fleet for StarDust. 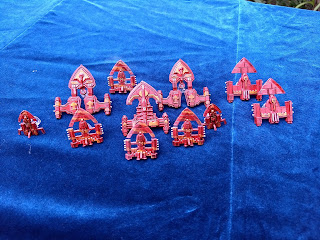 And they got painted up quickly. I haven't touched the fighters yet.

And lastly, some Malifaux minis. 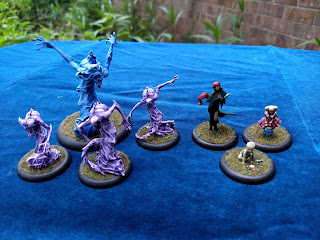 This is the "No Shelter Here" box set. 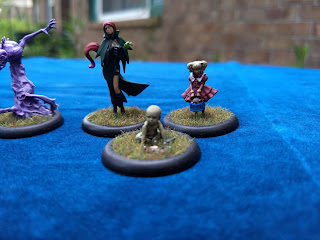 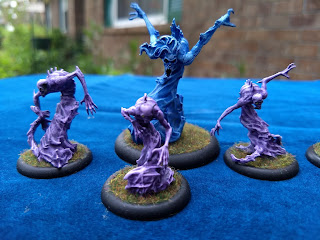 Three ghosts and a poltergeist

One of these days I'll put Malifaux on the table and try to learn the system, but until then, I just really love painting the models. Happy Fourth and stay safe! 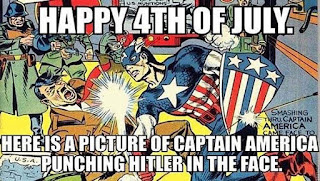