Standing the Test of Time

I wanted to pick up a few Italian Renaissance "flavor" buildings for the 1/72 plastic troops and has trouble finding anything I was terribly happy with. Either the cost was too high or the models just didn't have the right "it" factor. I started perusing Wargame Vault for paper buildings and found quite a few suitable candidates. Just a few bucks and less than 24 hours later, I had them printed off at Staples on heavy cardstock. The PDFs were scaled down to 65% to be scaled for 20mm.

I've only put two of them together so far, but I'm quite happy with how they've come out. The trick is NOT rushing anything. I've mounted both on foam. 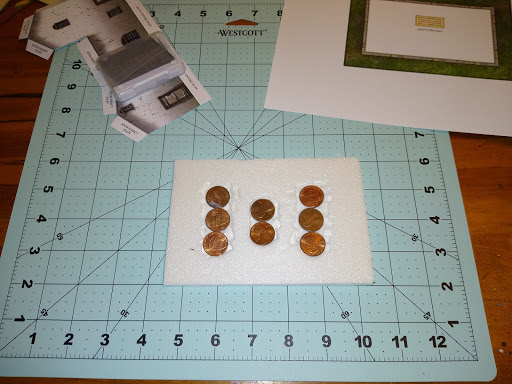 I implanted pennies in the foam bases to provide a bit of stability with a low center of gravity. 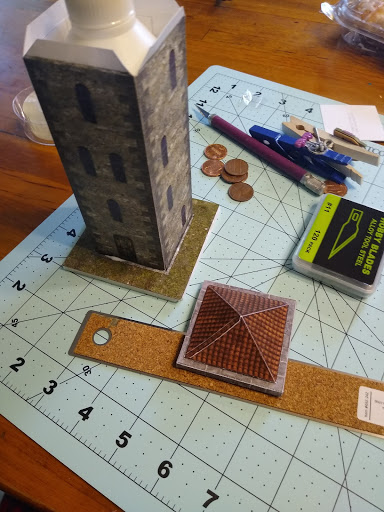 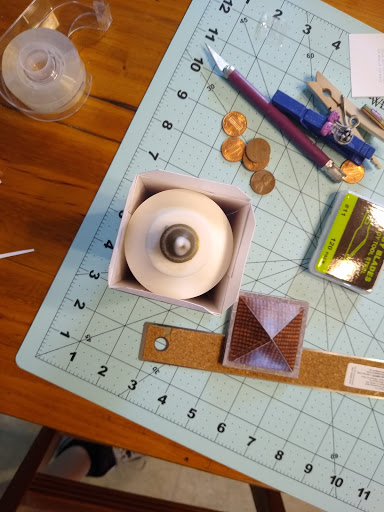 Magically, the bottle of glue fit perfectly in the tower, holding the base flaps secure while the glue set. 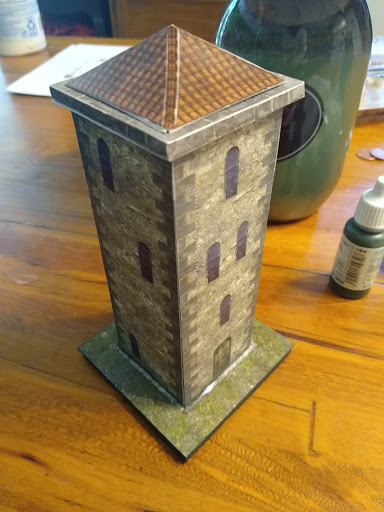 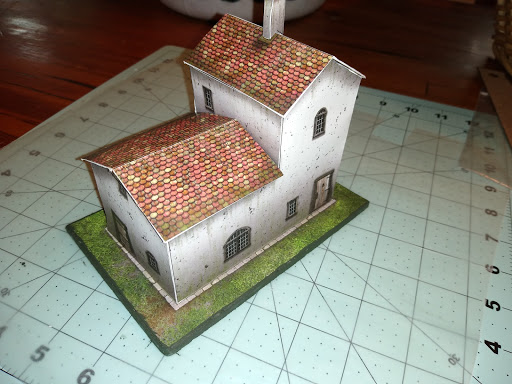 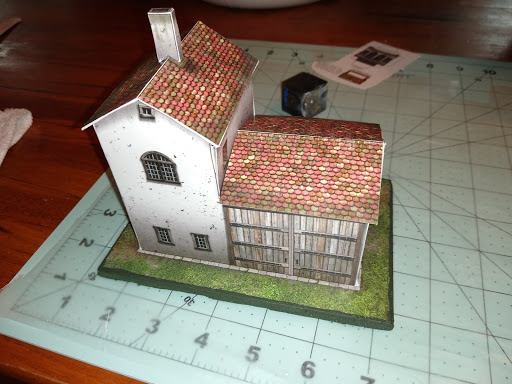 Et voila! A completed tower and carriage house. A first go of Swordpoint may occur tomorrow and it should look a bit more period-appropriate with these inexpensive additions.

I finished up a few more Infinity models this week. They're Combined Army Suryats Heavy Infantry. Very tooled-up and expensive from a list-building perspective but neat models and fun additions to the group. Now the question is, will they end up in a game of Infinity first or Stargrave which I just picked up this week? 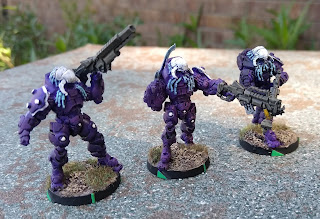 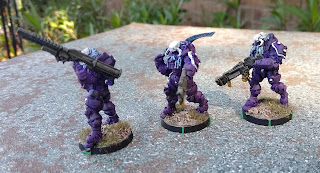 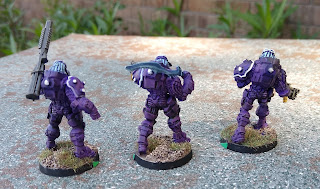 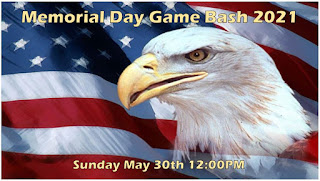 Howdy howdy! Check it out, a real tabletop wargame AAR on my blog! It feels like it's been a long time. Zig and I got together Saturday evening for a test of the Rate of Fire scenario I'm going to host at my 2021 Memorial Day Game Bash. Last year's edition was a Covid casualty, like so many other gaming get-togethers.

The scenario is a simple breakthrough / transit situation for the Germans and and ambush / kill for the Soviets, set in the summer of '41. The Soviets deploy hidden, represented by markers, including a few dummy counters. 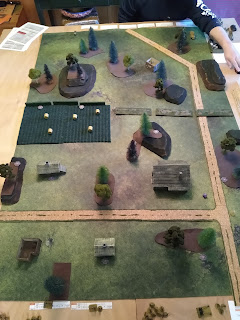 The battlefield. The Germans are transiting from top to bottom. They have an 8-rad and a recon fireteam in a Schwimmwagen starting the game on the tabletop. Everything else arrives later when the recon elements have done their thing. 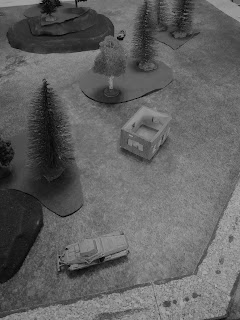 Hey look, there they are! 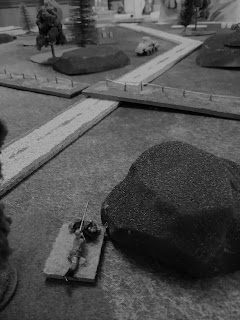 A Soviet AT-Rifleman takes a shot at the armored car. The crew take note and loose a burst of 20mm rounds into the treeline. A lucky shot takes out the Soviet. 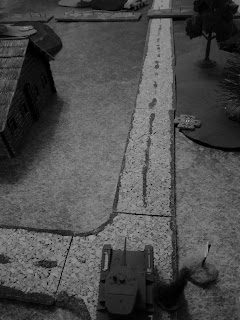 I moved a T-26 over to the road looking to shut down the 231. My shot is way off the mark, while the armored car's return fire manages to kill the tank's driver! At least the tank is stuck in a useful location. 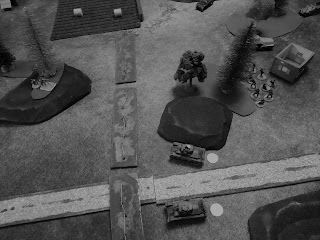 As German forces continue to flow in, I reveal a 12.7mm machine gun and loose a hail of fire at a nearby 38t. The tank crews grit their teeth and pray that the thin armor holds. It does, but barely. 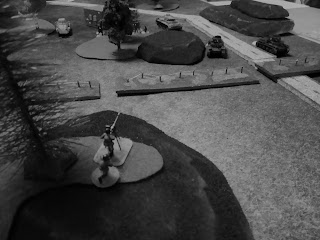 Another angle of that action on the road. A Panzer III cruises up behind the 38s.

The recon element take note of the machine gun's position and radio the mortar guys further back. A wicked accurate first-round takes out the team. 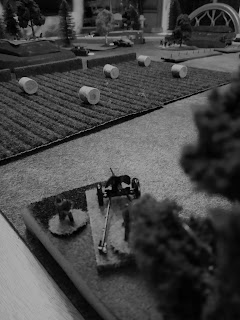 On the far side, the Soviet anti-tank crew finally have a target and take a shot at a Panzer II. The shot is a bit short and kicks up a geyser smoke and dirt in front of the tank. Return fire is ineffective. 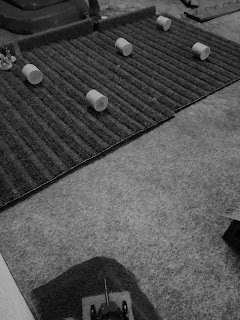 A second shot finds the mark and the wee tank's thin armor is no match for the high-powered 45mm round. Moments later a mortar round lands on the Soviet gun crew, killing two. Curses! 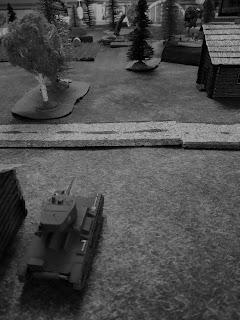 I pulled my second T-26 out of hiding and took a long shot at the big 8-rad which had gotten itself into an unfortunate position. The tank commander's shot is perfect as the armored car quickly belches smoke and flame! 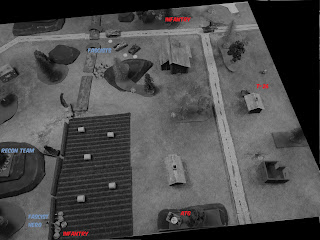 Things are looking grim for the Soviet defenders. The only positive news is that time is running out for the attackers. They were given 10 turns to exit as many units as possible from the far end of the battlefield and time is rapidly running out! 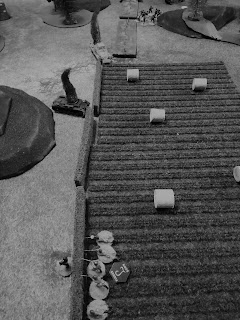 There was an infantry engagement at the edge of the field. The Soviet defenders held but the Germans were absolutely fanatical! Although nine of his brothers fell, Private Meine felt like he could take on all of Russia himself. He continued fighting as the rattled Soviets recoiled in horror! 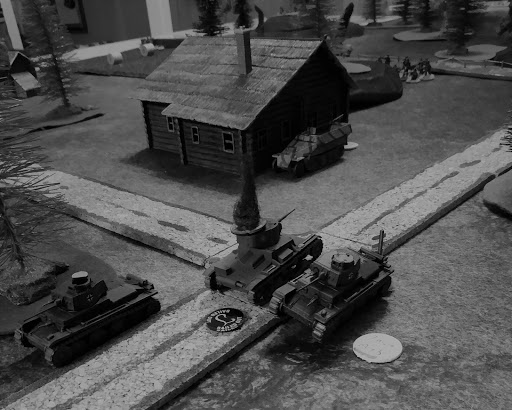 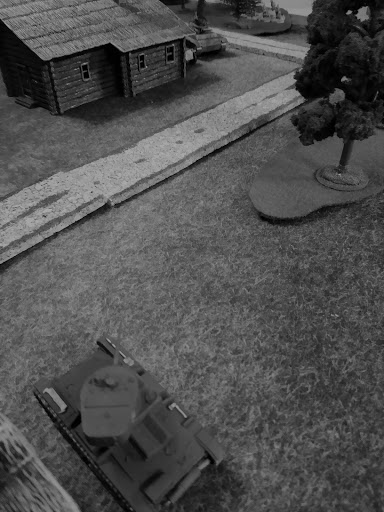 The commander of the Panzer III underestimates the gun on the remaining T-26. A well-aimed round punches through the German tank and it is destroyed.

At the end of the day, Ziggy managed to get two tanks and a halftrack loaded with an infantry squad off my side of the table. I was able to kill two tanks, an armored car and rendered an infantry squad ineffective. It was an enjoyable battle. The Soviets probably came out on the better end of things, since the Germans still had an infantry squad and recon team left against two full Soviet squads and a T-26. The remaining Germans would be hard-pressed to achieve their objective.

Terrain setup was solid, troop choice fine. Ziggy suggested that all German infantry be motorized or mechanized, which I think will be fine, but we'll add a tank to the Russian side and maybe one more AT Rifle. Ten turns is fine. e were able to set victory points for specific activities. I'm confident that the game on Memorial Day will be a good one.

Be well and good gaming!