I've been working on some urban scatter terrain this week. I picked it up from Impudent Mortal - it's the very common laser-cut MDF material that everyone uses these days. I'm quite happy with the results. 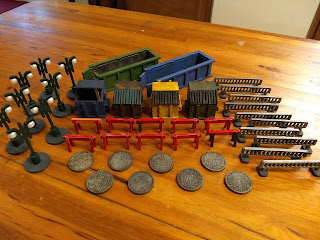 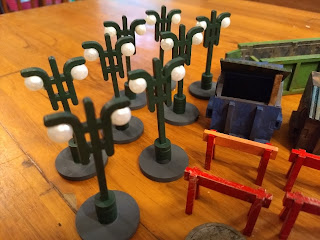 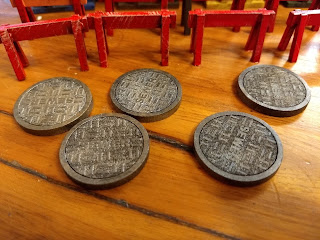 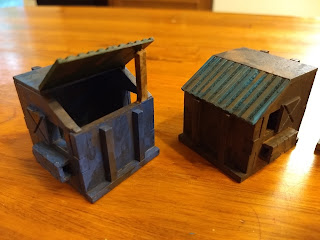 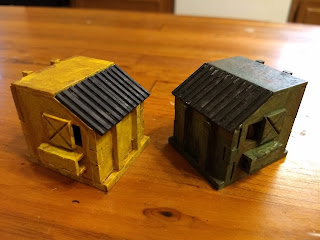 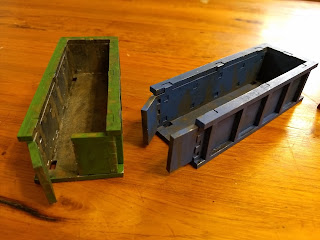 And a couple of large construction dumpsters.

I had a very quick intro to Batman Miniatures Game the other day - a bit late for sure since I've got quite a lot of stuff for BMG but... better late than never. The only hiccup I see with it is the numerous special abilities that the characters have that will require constant book-reference during a game. The basic mechanics are simple enough though. I'm looking forward to a proper game.

Email ThisBlogThis!Share to TwitterShare to FacebookShare to Pinterest
Labels: Batman

As you may remember, Ziggy and I were collecting Firestorm Planetfall miniatures just prior to Spartan's collapse. Since then, we've bought up loads of clearance stuff, but the painting has been slow to be sure. This week I cleared the unfinished items from the queue which was an Aquan Prime Recon Helix. 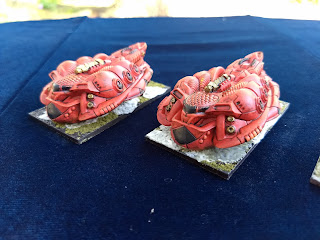 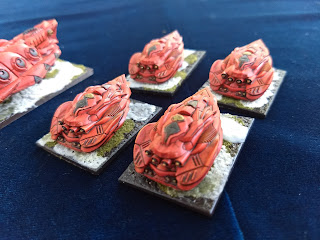 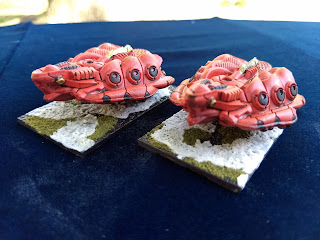 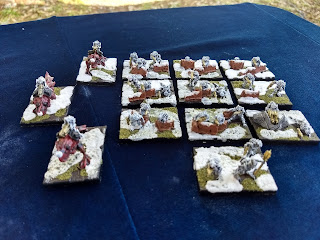 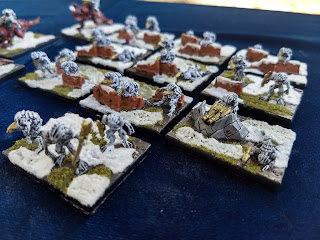 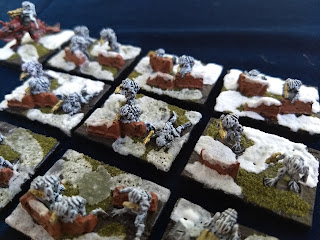 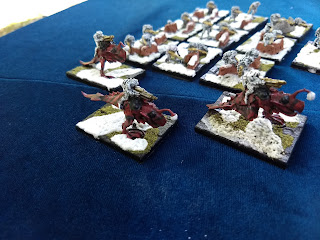 I think some straggler infantry from the Command Helix (still in the box) made it into this lot. Zig and I may but PF on the table this weekend. It's been a while and they're such pretty miniatures. It'd be a shame to not let them get out and play!

Email ThisBlogThis!Share to TwitterShare to FacebookShare to Pinterest
Labels: Planetfall

The Space Cadets re-convened in Brunswick over the weekend for a smashing round of SFB. The March 2018 edition included Max who's played with us before and a new player, Caleb. The scenario I concocted featured Tholians and Lyrans, primarily just because it felt like a fun pairing.

The Tholians have sent two PC+ and two CMC (commando PCs) two destroy a recently established Lyran moon base. The moon base is composed of three ground-based disruptors, a mining station, agro station and science station. After a few turns, some Lyran ships arrive to restore order.

Mike and Dave took the Lyrans (a war destroyer Tug + commando pallet and a heavy frigate). I was gifted the Tholian CMCs while the understudies each got to command a PC+. 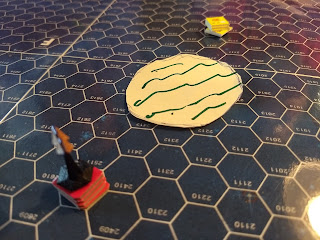 The Tholian stack of doom makes its way around Pizzahut IV. Many shuttles have just launched from the moon.

A minor math issue resulted in our stack finishing turn one in the unintended hex. It didn't matter much. David, commander of Moonbase Alpha, emptied the tubes into one of my commando ships causing significant damage. Overloaded disruptor... phaser 3s... 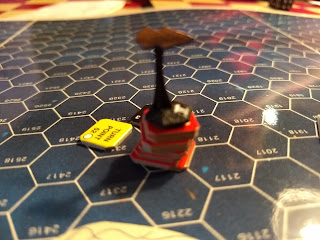 So here we are, adjacent to the moon. We burned the science station to the ground with massed phaser-1 fire. It was friggin' awesome. The Lyrans were less impressed. 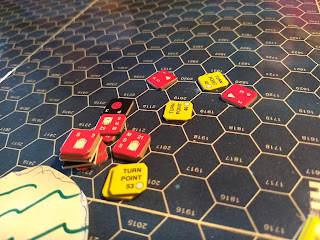 Many Tholian shuttles launched - we did need boots on the ground to make this work. My landing ships dropped to speed 6 and slowly eased around the left side of the moon, while the PCs worked on smashing more base sections. The Lyran ships would be showing up soon and would be ruining all our fun. 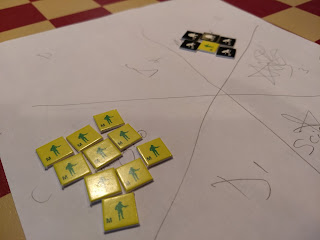 The Lyrans massed most of their troops in the agro station. Our first wave (the black counters) did well against the few defenders in the mining facility. 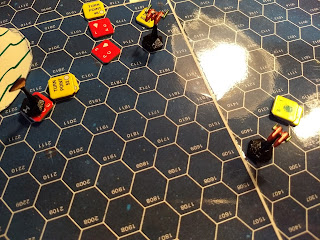 After mashing up the moon base, we Tholians had to get out of Dodge! We were able to recover surviving marines and made a run for it. I had to convince my junior staff that their ships existed to escort my troop transports. That's my pair in hex 2112. The PCs are on more of an intercept course. Mike's tug from hell began getting its money's worth out of the three ESGs it's got. 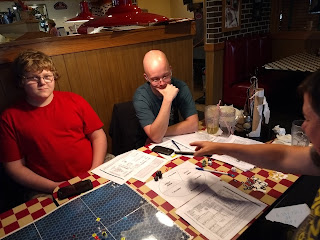 A despondent Caleb (left) and Max suffer the slings and arrows of misfortune. Mike's new favorite thing ever crushes Max's ship, tractors it and begins boarding with Marines. 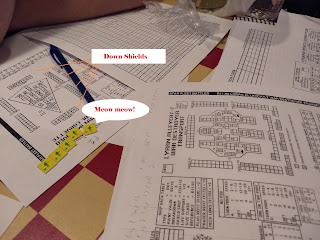 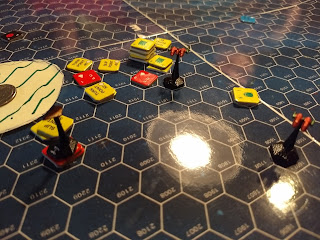 Mike also put a zillion shuttles out with BPs. He was determined to capture the Tholian ship! 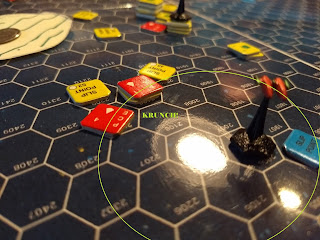 David's frigate caught up with the damaged (and thus slow) CMC and Caleb's PC. Both were rammed by and ESG. My ship did not fare well and was done in. Whaaaaaaa! 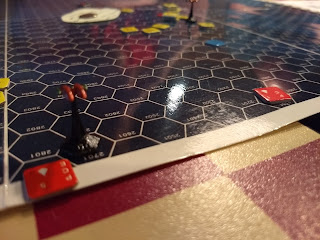 My other CMC and David's frigate traded shots - he missed big as shit, while I knocked down a shield and caused a single internal! Huzzah! Caleb's PC got away as well. 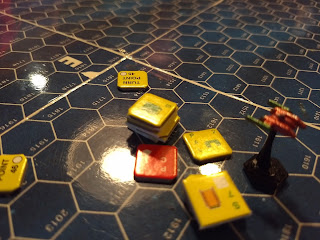 Max's ship and crew were not so lucky and was captured by the cat people. Off to the kitty litter mines!

Overall, a successful raid, but poor getaway by the Tholians. We agreed it had been an entertaining afternoon and liked the scenario quite a bit. Never doubt the hitting power of sixteen Phaser-1s. Four small Tholian ships hit like a ton of bricks! Oh yeah, so does a Lyran tug!

Zig and I played a couple of introductory Star Fleet Battles games last Saturday. Although he'd played it before, it's been at least 15 years so we started from scratch. I set him up with a Klingon F5 (a top-shelf small ships with an assortment of cool toys) and had him smash up a couple of small freighters. 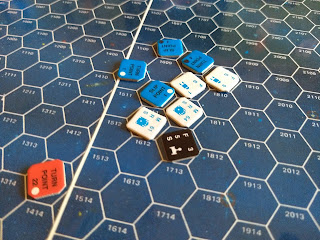 It was the predictable cake-walk for the Klingon.

After dinner we played again, this time I drove a real ship - a Federation frigate which is an even match for the F5. 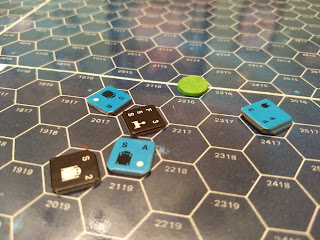 He drove well and in the end it was a draw, though he'd suffered many more internals than my Taco Stand of Doom. Wily driving by yours truly helped me spread damage over most of my shields, while I was able to keep blasting away through his down #1 shield hole.

I also got some SFB minis last week which got painted up in no time at all. 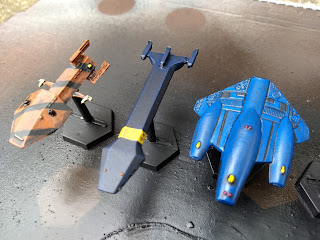 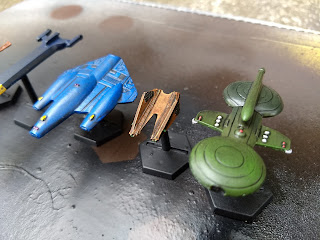 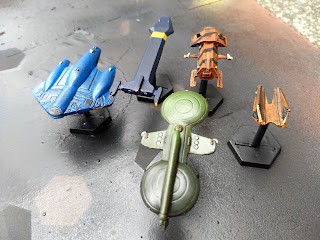 The kit and kaboodle. I'm rather pleased with the results, particularly the green Gorn. There was also a Federation CA in the bag, but since I painted one recently, I wasn't keen to do a second. One of these days.

We're supposed to play our Brunswick game this Saturday. I'm looking forward to it! The scenario I've put together should be amusing - Basically it's Tholians vandalizing a Lyran moon base.
Posted by Ski at 7:24 PM 2 comments: