I finished up three shipping containers for the boat this weekend. Like the boat, they're from TTCombat and are MDF kits. Overall I was very happy with the kit and would recommend it. 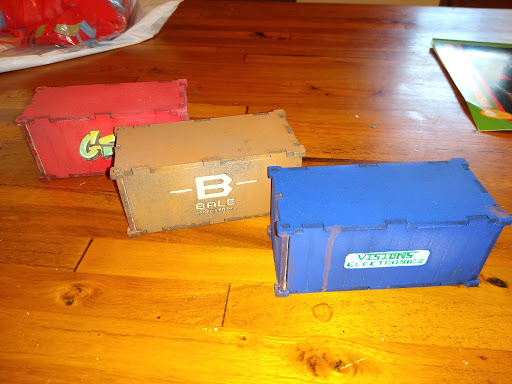 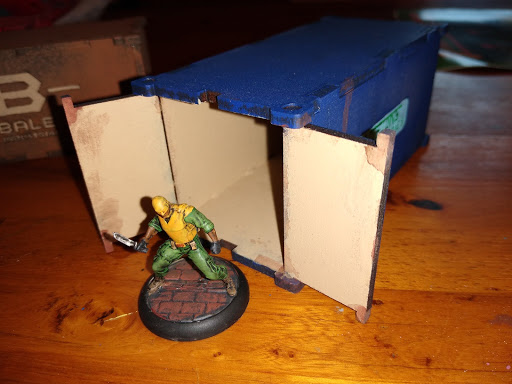 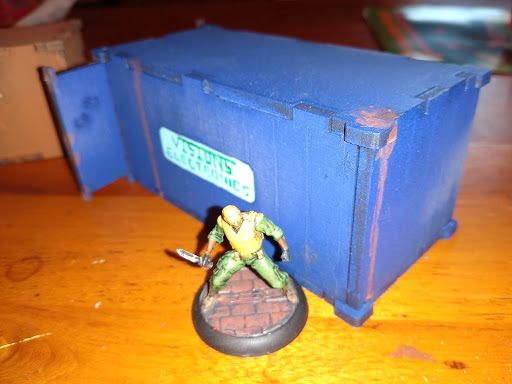 The doors open if you're careful. Batman villain for scale. 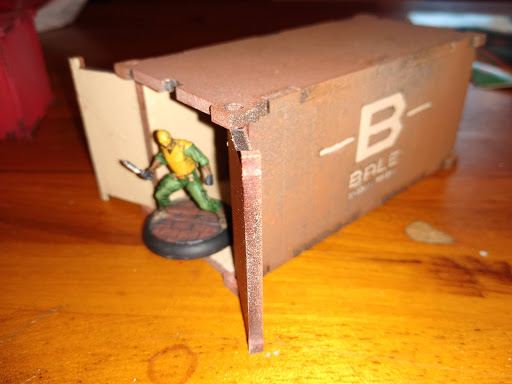 Bale Industries... who could that be? 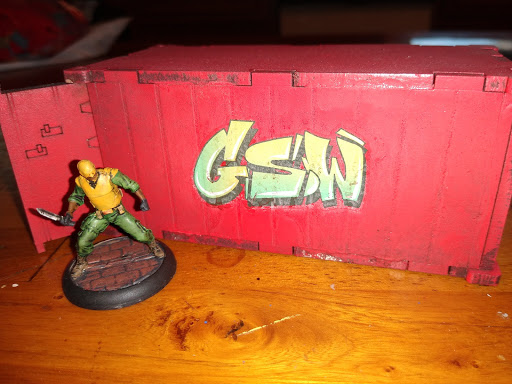 This container has no engraved logo. I ordered some graffiti decals from Green Stuff World. Very happy with those decals. 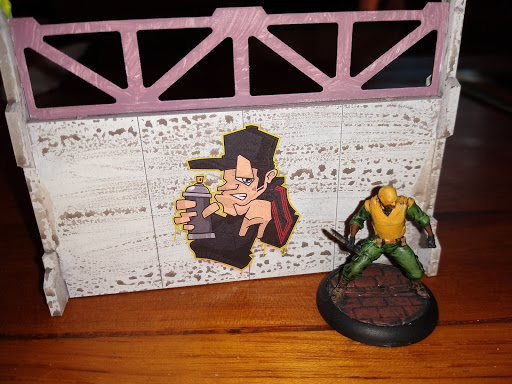 Just for grins, I slapped one of the decals on one of the walls I did up a few months back. I like 'em a lot.

It's been a good couple of weeks for painting. I've gotten things done without getting bogged down. Painting sessions have been sporadic but productive.

First up are twelve more bases of 1/72 cavalry for my Italian Wars project. That's 6 Jinetes and 6 Balkan mercenaries. The mercenaries are Jinetes figures with colors to match the Stradioti I did earlier and decidedly different hand-made shields. 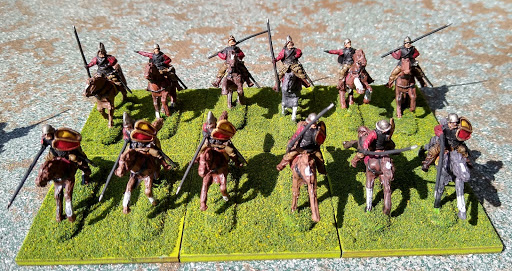 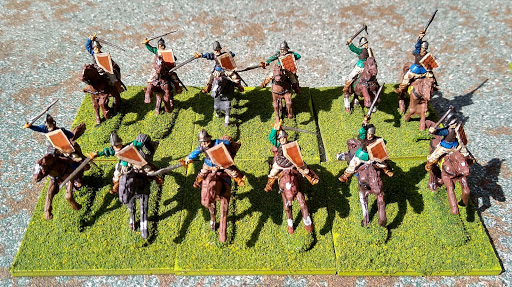 Curved lances aside, they'll do just fine. Now that I have enough models to fill out two force lists, it's time for a game! I'll try to get that planned a couple weeks out.

The next project was this monster! 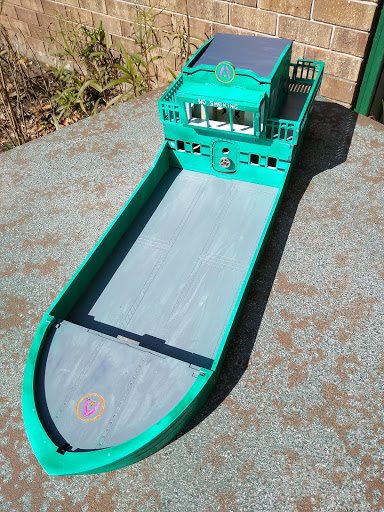 The MV Saucy Sue. It's a 1/28 scale cargo ship meant for modern skirmish games - it'll be appearing in Batman and Infinity games on my tabletop. I did buy the extender that adds about 10 inches to its length; I haven't put it together yet. The basic boat is about 24 inches long and came from TTCombat as an MDF kit. 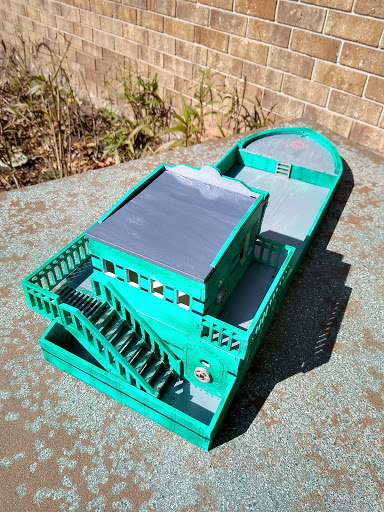 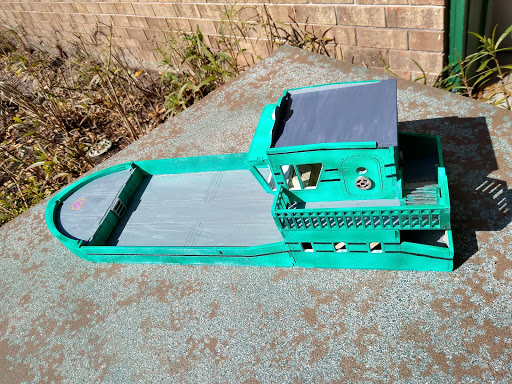 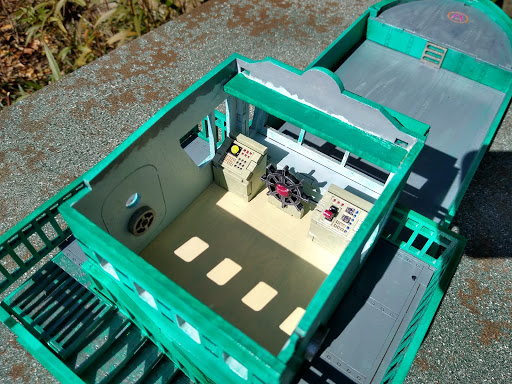 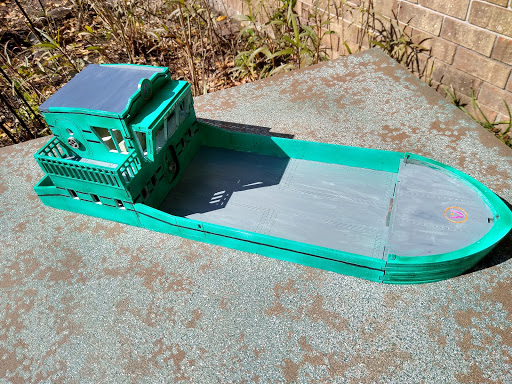 I added the shelf and roof magnets for the bridge. I figured the top should of course be removable! I guess I should get going on the extension and cargo containers.

I checked in with Zig on Friday to see if he was up for a game Saturday.When he said he was, he asked which game. For some reason Dystopian Wars popped into my head and he was up for it. It's been over a year since we played so it was great to put it back on the table. Our last outing was a land battle, so we of course wanted a naval affair this time around. I put together a force of Empire of the Blazing Sun (Japanese) and Zig brought out the British - our original fleets. 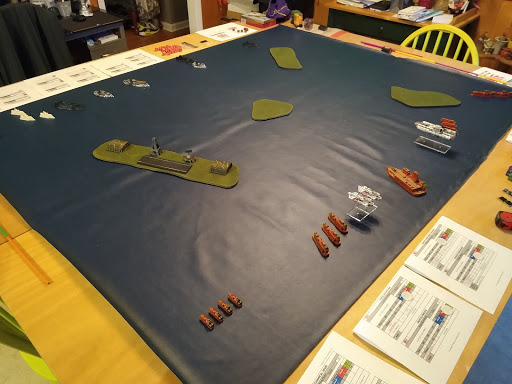 Ziggy's fleet looks much the same way it did nine years ago. No new paint recently! We did a straightforward 1200-point free-for-all battle. 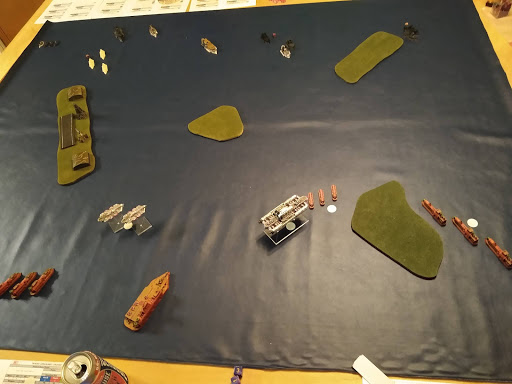 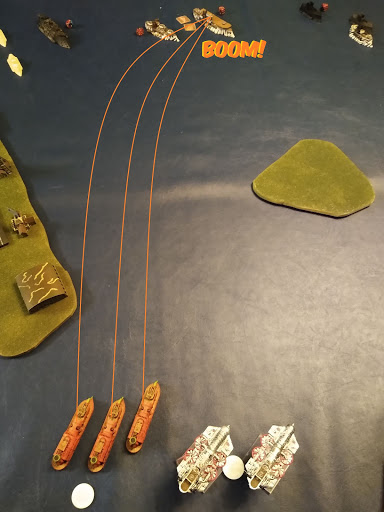 My Armored Cruisers get things going early with a massive salvo of rockets at the British carrier! The flattop is hit hit hard and loses four hull points. It's halfway to the bottom of the channel already and we're just getting started. 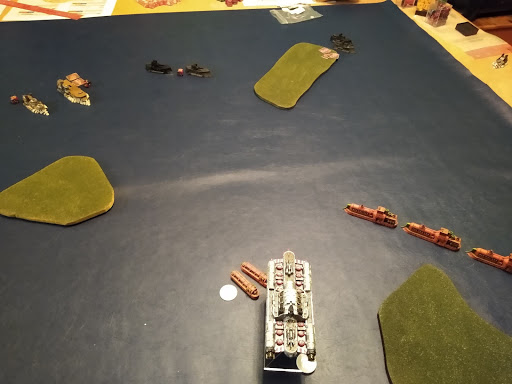 One of my little destroyers was wrecked by cruisers opposite them. My cruisers steam in a line, launching rockets at the armored cruisers in the back corner while my massive War Gyro floats steadily forward. 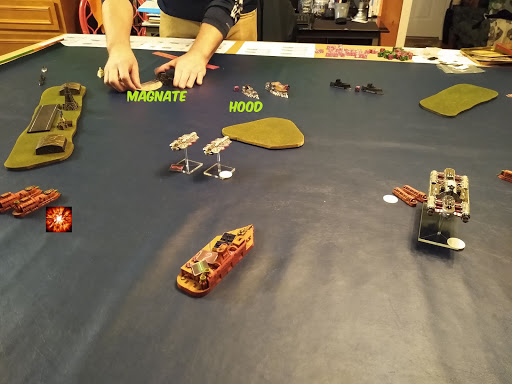 Towards the left, the Magnate Battleship and Hood Battlecruiser combined to sink one of my Armored Cruisers and damaged my carrier! The heavy destryers, obscured by Zig's hand damaged one of the light gyros. 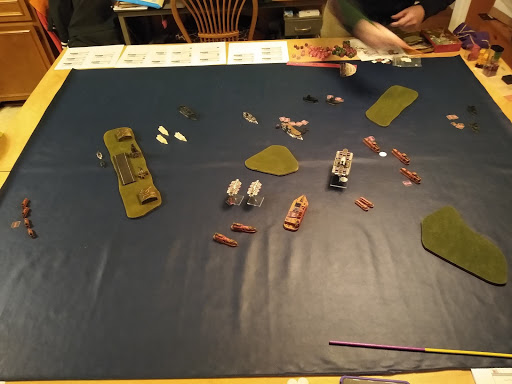 We went out for wings and beer between turns two and three. When we came back, the scrum began in earnest with massive close-range salvos going both ways across the waves. My frigate squadron off to the far left got the better of their British counterparts. My light cruisers on the right had a terrific round of shooting, wrecking their opposite numbers! 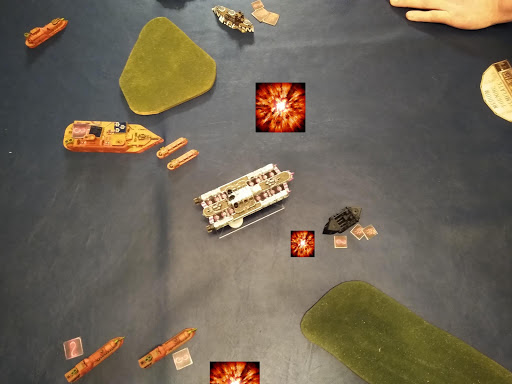 In the middle of turn three, my War Gyro drove in the nail. If drifted right into the middle of the Britsh fleet, dropping bombs on a cruiser, rocketing a distant cruiser off to the right, and smashing the carrier with gunfire killing three capital ships in a single round of fire. Now that's getting it done!

We played out the rest of the turn but Zig threw in the towel. We tallied up the scores it was 26-20 in favor of the Japanese. A tough battle a it felt good to get one in the W column! We're hoping to get DW back on the gaming table a bit more in 2021. It's always a fun time that doesn't require much of a rules refresher at all.

It's been busy and shifting priorities have left me with little time for real AARs lately. I have gotten in some dice and soldiers in the last couple of weeks though. Ziggy and I got in a game of Infinity a couple weekends ago. I pulled out the Combined Army plants for a run with the new rules. They held up well, although I think I'm getting a bit wiser with how to play with them. They're very much a fancy, sneaky army - not a hammer by any stretch of the imagination! 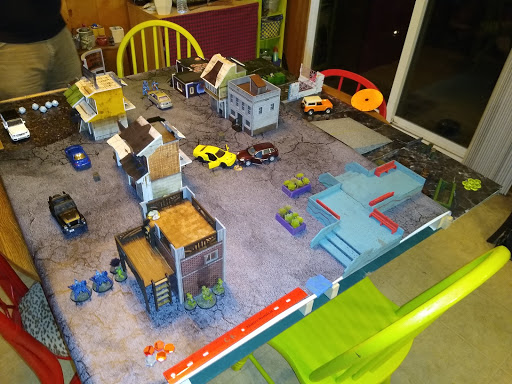 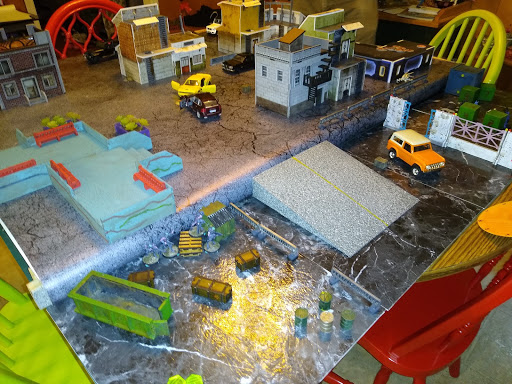 It was the first outing for my new split-level gaming table. I made 2 18" x 48" raised sections to give a bit of elevation change to my layouts. It looked good and worked really well. 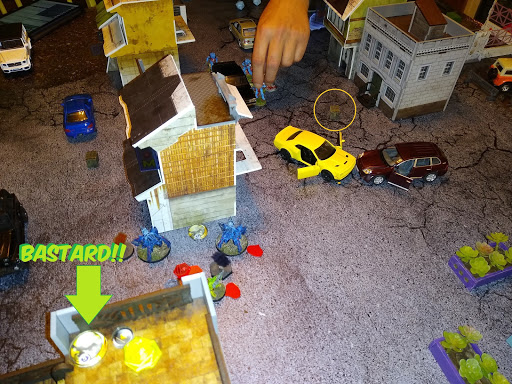 My plant of the match was a cheap schlub with a grenade launcher who was in a terrific position overlooking the central objective location. He absolutely wrecked Ziggy's knights who tried to move on that spot. It was really pretty glorious. 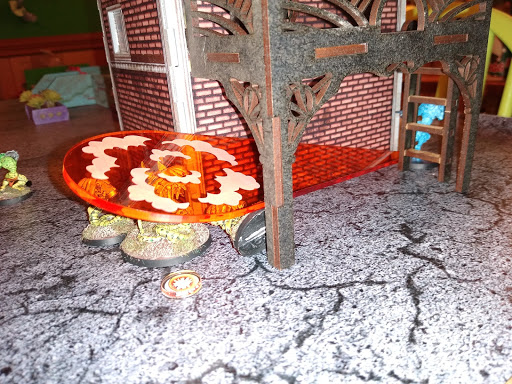 The swine flyboy knight made another appearance, this timing earning the title "Worm Burner" for cooking Dr. Worm and his assistants with ye olde flammenwerfer. At the end of the day, I got beaten pretty badly from a points perspective, but caused considerable casualties so it was of course worth it!

I put my space ship game Stardust on the tabletop last Saturday for a bit of solo playtesting. I wanted to test out a different activation / initiative system. That worked well. The game itself was a hoot too! 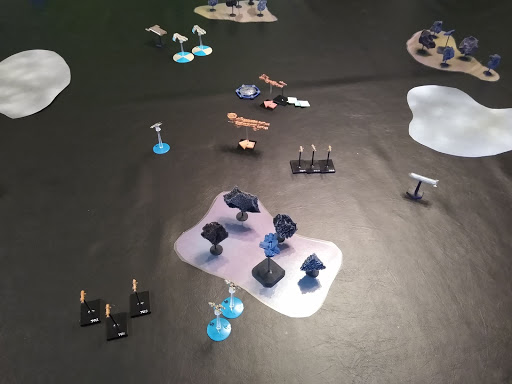 Both fleets converge on the objective space station! They're both trying to offload boarding parties onto it. 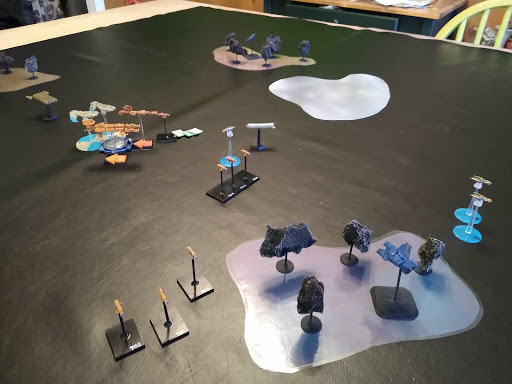 The Orange fleet was hammered due to some really streaky dice rolls primarily. It was really weird, rolling the same dice.. the Orange side's rolls stunk on ice while the Tan side's were phenomenal! It was good to put it back on the table again.

Be well and good gaming!