Got some 1/600 aircraft on Monday for the French Navy and have been working on them a bit. It's a proxy collection for sure, but I'm not so picky. A-1 Skyraiders standing in as Alizes, CH-53s standing in as Super Frelons and Gazelles standing in as whatever light naval helicopter needs to be represented on the table. I have some others on the way from Tumbling Dice across the pond - F-14s, F-8s, Super Etendards, Lynx and Seasprite Helos. I've never ordered from them before and their prices seem reasonable, even with shipping. I'm interested to see how their stuff stacks up to Pico Armor which is gorgeous. Here's a WIP of the aircraft... 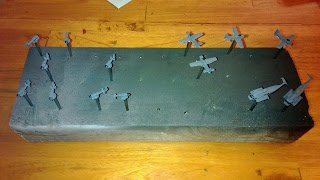 Email ThisBlogThis!Share to TwitterShare to FacebookShare to Pinterest
Labels: Shipwreck

I put some ideas to paper this week for a spaceship combat game. Yeah, yeah... I know there are something like 50,000 already-published rulesets out there but either the movement rules are weird or it is a licensed property or the rules are unplayably complex or whatever. So, in true gamer geek fashion, I've put together the basics for a game tuned to my tastes. Thusfar, the rules are very simple - movement, shooting, damage. I haven't done anything regarding different weapon types, special equipment (shields, tractor beams, etc), small craft or any of the other stuff that makes space games special.

Fight 1 - Junior and I both put Frigates on a heavily populated table. My youngest son had dumped out the box of Heroclix earlier so we littered the battle area with "asteroids." Junior fire both forward cannons at me on turn 2 or 3. Both hit and my ship exploded big time. Tweak #1 - reduce damage by half.

Fight 2 - Junior takes a Destroyer and I take two Frigates. New damage rules work out much better. I can't remember who won this round.

Fight 3 - Junior takes a Light Cruiser and a Destroyer. I take one Destroyer and three Frigates. I took some pics and an actual "game" developed with both of us trying to get some sort of advantage over one another. Here are some pictures of the proceedings.
I blew up his Destroyer on the same turn that he finished off a Frigate and hulled out my Destroyer. My force failed its morale test and got out of dodge. Overall, I was very happy with the way the game played out and am looking forward to trying it with more "stuff."

The red and orange striped ships that Junior was using, I just finished this week. Here's a group shot. They are ACTA: Noble Armada miniatures - I haven't done the fighters yet. 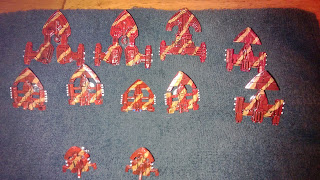 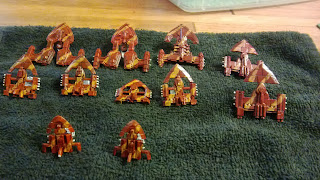 Email ThisBlogThis!Share to TwitterShare to FacebookShare to Pinterest
Labels: StarDust

Long-time readers may remember my ranting about Flames of War and my disgust for Battlefront. New readers - see the previous sentence. Regardless, I ended up playing FoW on Sunday with Mike. Our friend Alan is trying or organize a Kursk-themed FoW tournament for August; and since Mike and I haven't played in, oh, about a year and have agreed to play in the tournament we thought we could use a refresher.

The tournament is set at a ridiculously high points value, 1860, so forces are enormous and there is not a lot of empty space on the tabletop. Having sold off much of my FoW collection last year, I used out-of-place DAK Germans for a Eastern-Front battle. The equipment was fine, the paint job - not so much.
My force list:
4 Panzer III Js
4 Panzer IV F1s
4 Panzer II Fs
2 8-Rads
Panzergrenadiers in halftracks
Battery of 105s
HQ and 2IC on Pz 3N and Pz 4F2

Mike has a British army for FoW so we converted them to a Soviet Tankovy (lend-lease) with Shermans and Lees, as well as a bucket of infantry, mortars and guns.

What followed was a tale of two dice-throwin' hands. I could do no wrong, or more precisely, Mike's dice could do no right. 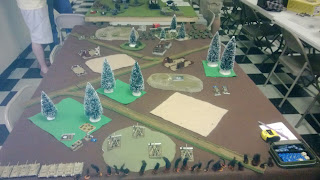 Pretty ducks all in a row. Mike's company prepares to attack. I have artillery on the table and two tank platoons hidden in ambush (idling in the lower left until they truly get placed). 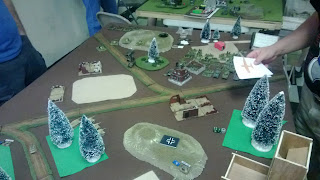 My Panzer IIIs along with the 2IC appear from the trees and unload on the Soviet rental tanks. Still pretty typical. Mike's awesome paper plane is about to make a strafing run on those tanks. It failed miserably. 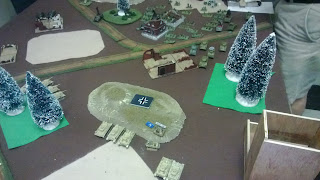 I bring the Panzer IVs out since the forward objective was pretty exposed and vulnerable. A few more Soviet tanks get rattled. Still nothing too crazy. I did finish off a third Lee, causing a morale test which the crews passed easily. 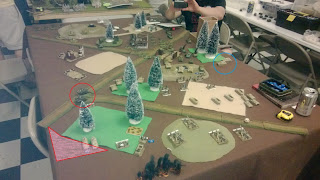 A turn or two later. Mike moved his remaining two Lees around to get some flank shots and my Panzer IIIs in the woods. He'd also moved his Shermans up around the hill with the other objective. His gunners utterly failed to hit their targets leaving his tank platoons really exposed.

During the postmortem, we decided that Mike should have double-timed his Lees to the area I marked in pink. I would have been forced to react to them, throwing me off my comfortable position. As it was, I was able to leave my tanks in a great defensive position and return fire.

My return fire wiped out the Lees and caused enough casualties to the Shermans for them to rout. Mike called off the attack. I eliminated two tank platoons and suffered no, nada, zip, zilch casualties. All I'd removed from the table was two Kubelwagens "sent to the rear." It was a bit embarrassing and I felt bad for Mike, but "dice is dice." FoW has some serious deficiencies with the way some things work which is part of the reason I don't play it for fun any longer.

Mike has never played with Soviets in FoW before this game and they are tough to get used to. We had an extended post game chat about things and he should be better off next time if his chance cubes cooperate.

For three hours on Sunday afternoon we had a very surreal time - two guys playing a game they care nothing about, surrounded by interested parties, just as a refresher for a tournament neither of us particularly wants to play in. Ahhh life.
Posted by Ski at 12:54 PM No comments:

Three weeks ago the bug swarms started descending from the skies in their spore-meteors. They hit every part of the planet and nowhere was safe. Nowhere, unless you were armed and ready to give the alien invaders a fight.

A "raiding force" including Warriors, Incursors and a Colossus was making its way towards Kinshasa when elements of the People's Popular Front caught up with them.


We called the game there, or shortly thereafter. We forgot to set a timer - the humans simply need to last two hours in this scenario. It had been close to two hours though. I like the game a lot and I think everyone enjoyed it. I had James as a teammate on the human side and Zig and Junior combined as the hivemind. The human force was very close to its break-point our units were beaten up or just lean to begin with. If the bugs had been able to summon one more unit of reinforcements I think we'd have lost. I definitely want to play this again!

We'll need to tweak our lists next time - firebugs were useless in this game because of their slow speed. Assault Warriors and regular Warriors are where it's at. The Incursors were OK, but without dashing, not quite as nasty. I think I'd prefer two units of shooters to the one tank. Well... next time.
Posted by Ski at 9:12 AM No comments:

Finished up those French ships this evening. I like how they turned out. Now I need an excuse to put on the game table... 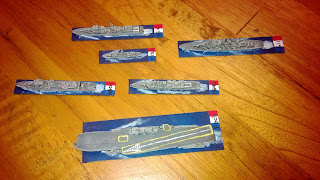 I did some work on those ships yesterday. The still need a bit of work, but they starting to look purty. The lines on the carrier's deck came out a little catty-wampus, especially the "arrowhead" but it's not too bad for freehanding it. 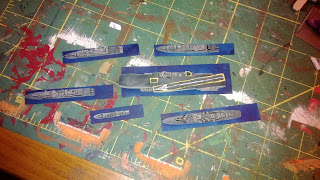 I've been a busy bee, considering that I feel like I have been slacking off at the brush. Got the bug army done, and here are some Dystopian Wars ships I just completed. Ziggy gave them to me as a birthday present. 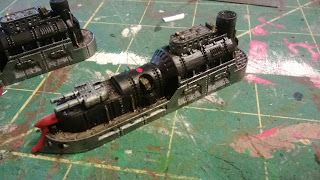 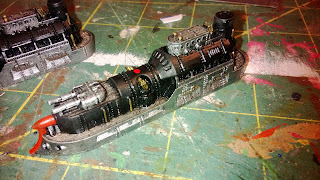 The black and red looks imposing on the tabletop, and believe me, with EoBS, looking imposing is about as good as it gets.

Next up on the table are these lovelies... 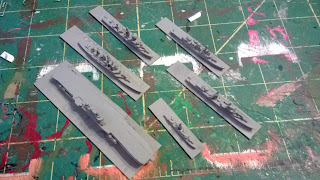 A group of Frenchies for Shipwreck. This will be my first "real" carrier - the Moskva doesn't count. I guess I should find some planes and helos for them.

I also have a warband of Splintered Light Bugbears for SBH or whatever other game they get recruited into that have just been primed and a box of spaceships on the way! Plenty of lead for a little while.

The Swatters bug army (Khurasan Parasachnids) are finished! Here are some pictures.

I hope to give them a go on the tabletop this weekend!
Posted by Ski at 5:59 PM No comments:

Email ThisBlogThis!Share to TwitterShare to FacebookShare to Pinterest
Labels: Aliens

Dennis and I took out MDRG Saturday and played a couple of one-off games. We put together 300-point lists- he used Plant Men and I used pretty average humans with guns and two pet giant radioactive bugs. 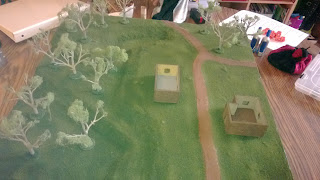 I suppose the uppity tree men were going to try to reclaim a bit o' the ol' North Wood back from the human settlers. Here is my tiny force: 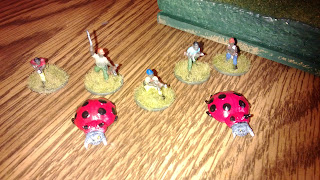 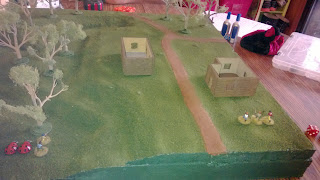 For the record, I think I was waaaaay over-generous with the cover on the table, especially since Dennis gave his whole troupe "Stealth." Oh well.

My son had been watching off and on and wanted to play, so we decided on a three-player game. Or more precisely, Dad gets his ass kicked by two opponents this time. I drew the short straw and would be defending against Plants and Radioactive Bugs.

So, two entertaining games even though I came up on the crap end both times. I like the three-player mechanic, although the 2 v 1 setup sucks bad. May need to change that to a 1 v 1 v 1 in a future game to see how it works.