I've made some progress on my SBH board for Gnomecon. I still have a little bit to go but it is starting to look quite presentable. 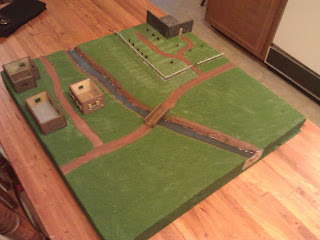 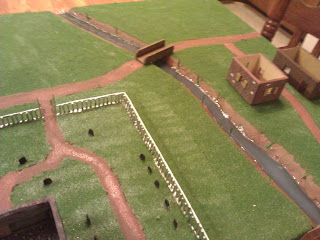 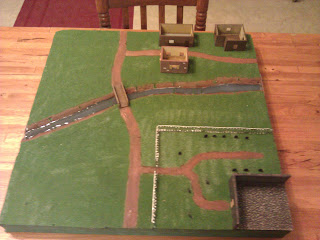 In other news, the MSH game for this Saturday should be a go. Hooray! I haven't gotten in a good old fashioned wargame in a while.
Posted by Ski at 7:45 PM No comments:

Someone commented on the uniform color I used on the chaps below. The fellow on the right is wearing a mid-1980s olive-drab uni. I don't think mine is a far cry from that. 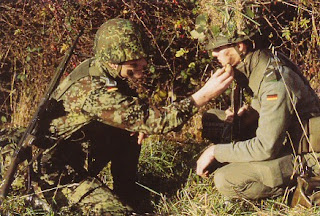 I 'm also quite aware that the brown on the vehicles is a bit to the orange end of the brown spectrum, but I wanted it be "pop" a bit more from three feet away. 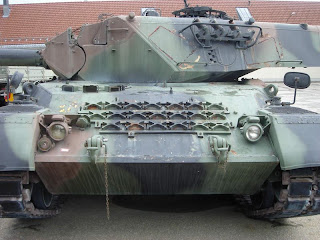 Well, the West German half Panzergrenadier Brigade is done. I'm going to be pretty busy this weekend (son's birthday - we're going out of town) but hopefully next weekend I'll be able to pit them against my Polish Tank Regiment. The models are CinC, except for the infantry and helicopters which are H&R. 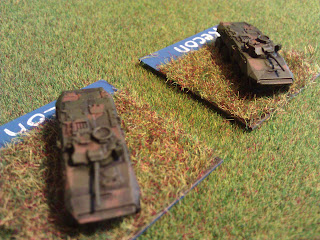 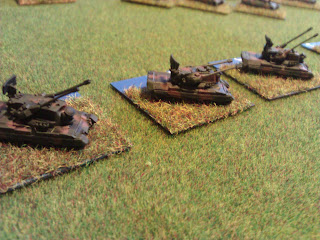 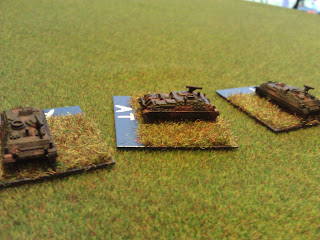 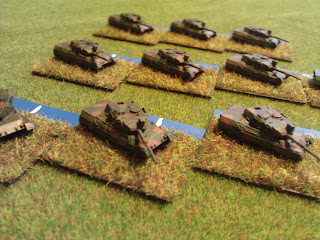 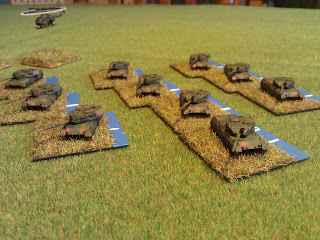 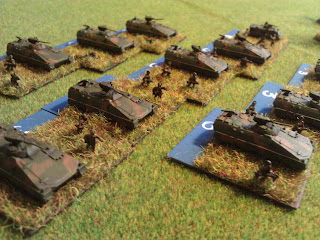 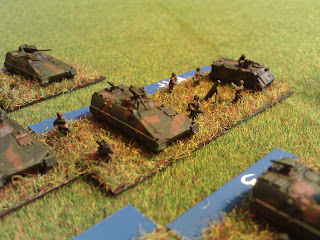 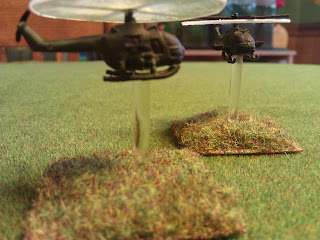 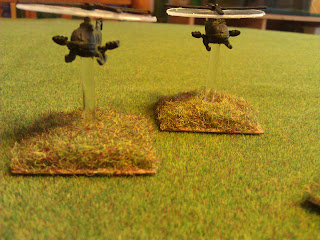 Dennis, Ziggy and I played a 3-player game of Dystopian Wars on St. Patty's Day. It was a scenario I created for three players called "Escape." I'll post the rules to the scenario where anyone who is interested can download them and give it a try. [LINK] The basic plot is that one of three fleets has come into possession of a top-secret thing-a-ma-jig and is trying to get away with it while the other two players are trying to capture it for themselves. We used the newly released 1.1 rules and 500-point forces. The battlegroups:
Ziggy, Britannia
1 Battleship
2 Gunships
2 Submarines
2 Frigates
5 Dive Bombers and 5 Fighters 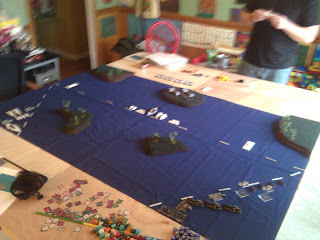 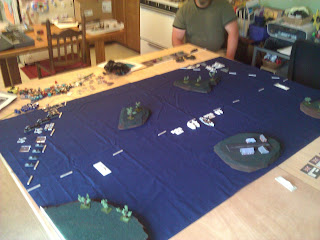 The battle opened with everyone making some rather obvious moves - the Japanese and Antarcticans moving towards the British exit zone and the Brits making a bee-line to the edge. The South Pole Corvettes zipped right into the middle of the central channel but three salvos of rockets from the Japanese cruisers quickly sank three of them. First blood, me! 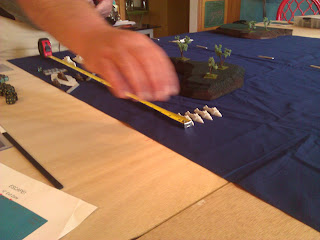 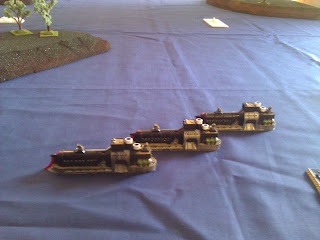 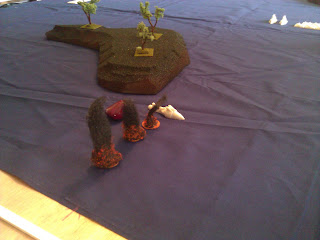 The British submarine closest to the Japanese fleet surfaced and took shots at a cruiser and a frigate but couldn't find its mark, and worse still, failed its Panic Dive. The frigates took advantage of the hapless U-Boat and devastated it with 15 hits from their combined broadside. That sank the immediate threat to the Empress' ships. There was plenty of other movement and shooting but nothing noteworthy. 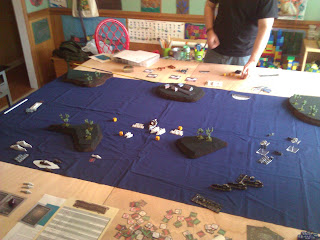 Turn two began with one of the Agincourt Gunships blasting one of the Imperial Cruisers and causing critical weapon damage. The CoA Battleship's ray gun tore into one of those Gunships causing a Sturginium flare which sent the ship leaping through the ether, straight ahead. The Japanese and Britannian tiny fliers all got involved this turn as well, first the Imperial torpedo bombers made an attack run on the HMS Hood, causing minor damage, then the fighters swept into the King's dive bombers. The gunners on those dive bombers were mighty impressive as they managed to destroy four of the five flights of Japanese fighters, to only one of their own number lost. The Royal dive bombers then dropped in on the remaining Antarctican corvette which was right in front of the Hood blocking its path. The planes made swift work of that swift boat. Their brothers in the fighter corps tore into the Imperial torpedo bombers, wiping them out to no loss of their own. 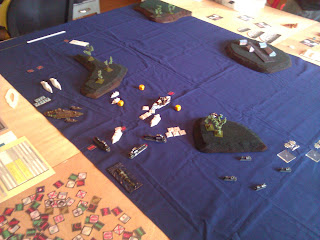 Beginning of turn 3. The game is turning into a melee in the center.

The Japanese cruisers swiftly cruised forward to surround the Agincourt that had gotten separated by the Sturginium flare and caused critical engine damage on the ship. The Hood fired its guns at the Aristotle and one of the Cruisers, damaging both. The Aristotle replied by pulling alongside her, blasting one of the Gunships to the bottom of the Indian Ocean and initiating a boarding action against the Battleship. The Covenant's boarding parties were wiped out, but left the Hood with only three units of marines. The remaining Gunship let loose on the wounded Jap Cruiser and finished it off. Not to be outdone, its little sister, the remaining Frigate, torpedoed another Japanese cruiser, fouling its rudder. 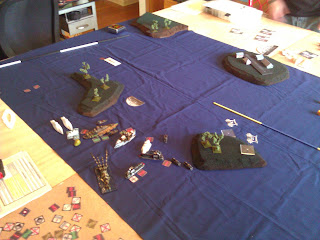 Start of turn 4. A mess to say the least.

The Aristotle fired its guns at both the Hood and the frigate which was blocking the movement of the Armored Cruisers. Each target took one point of damage and the Heavy Cruisers were still hemmed in. In an attempt to win the game, I boarded the British Battleship with marines from two cruisers (one of which had just wrecked into the last Gunship) but again the boarders were repulsed, leaving one marine unit on the big ship. The Hood pushed ahead, almost free of its pursuers, inflicting minor damage on one of the Japanese Cruisers. The Ika which had been rather quiet to this point sped into the Hood and attacked it, killing the remaining defenders but unable to capture it. The game would be decided by the next action: the first of the Armored Cruisers lurched forward into the British Frigate - if the collision caused enough damage to sink the Frigate, the other Cruiser could board the Battleship and secure an Antartican victory. If the Frigate held, the Japanese Frigates could swoop in and unleash their boarding parties. When the dice stopped bouncing, the Frigate was sunk and the Covenant marines were able to capture their prize! Another victory for the blasted Icemen.

This was the first run-through of this scenario so was a major playtest experiment. I think it worked very well. Forces had to be selected before anyone knew who would be the "Runner." We all agreed that maybe the Runner should get a bit of an advantage, maybe an extra 100 points (20%) or so to spend after determining who is doing what. I'll also need to set scenario specific rules that disallow submerging / obscuring for the vessel carrying the prize.
Posted by Ski at 11:43 AM No comments:

Tore through the West German micro-armor this week, they are all done, that's a battalion of Leopards and a battalion of Marders, plus two Bo105s. By the by, the helicopters were a real adventure to assemble. "Adventure" was not my first choice of words. I put a thin acrylic disc under the rotor to hopefully increase the lifespan of said rotors. Got Jaguars, Gepards and miscellany on order to finish them off. Worked some more on the SBH board - poured the "water" into the creek.

I'm not going out for St. Patty's Day this weekend - I'm past all that. I will be getting in a game of Dystopian Wars on Saturday and hopefully a round of FoW on Sunday to tune up for Gnomecon which apparently will be run under 2nd edition rules. Yay! Battle Reports to follow this weekend! 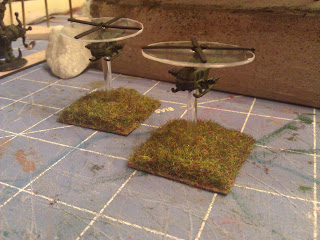 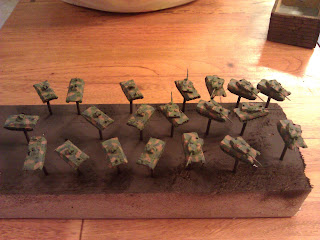 Alright, here are some pictures of the board and some of the decorations. I'm doing that third building - it's still bare foamcore and balsa right now. 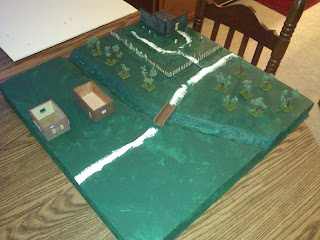 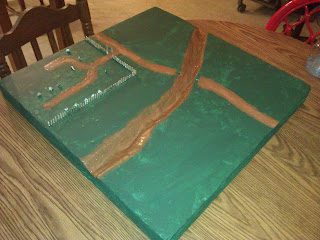 Wifey and I playtested the forces I had assembled for the con last evening. I'm glad we did - it was a heavily one-sided affair in favor of the Men, her Undead took quite a beating. I think the "Undead" trait may be a tad over-costed. I re-did the Undead force using Ganesha's online force-builder tool and tweaked it a bit so that the Undead have competitive Q and C scores. She really enjoyed the game so I imagine we'll be playtesting again soon.

I think the ongoing scenario for the con will be inspired by Army of Darkness, with the Undead attacking the village looking for the Necronomicon. I'll set it up for three or four waves of the walking dead. No 1973 Delta 88 tearing through Bad Ash's hordes though - that'll have to wait until next year.
Posted by Ski at 9:03 AM No comments:

Spent a good bit of last weekend working on the SBH terrain for Gnomecon. Got the crypt and one building finished. I've gotten about 80% done with a second building. I may do a third, once I get the buildings on the board and get a chance to analyze the Feng Shui of it. I also made some MSH river sections and half-size trees that could probably be used with damn-near anything I play. I'll post some pics when I get home, if I remember.
I ordered some Leopard 1A4s, Marders, West German infantry and BO105s to get going on a NATO MSH force. Hopefully the stuff will start trickling in soon so I can get to painting!
Posted by Ski at 4:10 PM No comments:

Email ThisBlogThis!Share to TwitterShare to FacebookShare to Pinterest
Labels: Text Only

So I've decided to build a themed battle board for SBH. I'll be taking to to Gnomecon in April and run demos Friday - maybe Saturday too if I decide to bail out of the FOW tournament. I'm using a 2 x 2 sheet of styrofoam insulation. Here are some pics of what I've done so far: 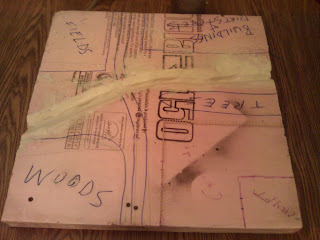 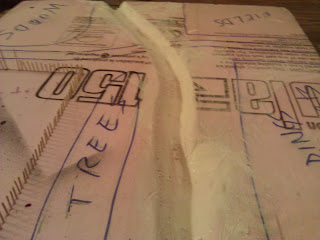 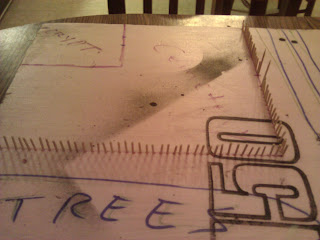 So I've gouged a river through it and planted a bunch of fence-posts around the cemetery. I've also made a bridge - it's pretty well done. I spackled the river last night to smooth out the edges a bit. I guess my kid and I need to play a few games here soon to get real familiar with the rules :)
Posted by Ski at 9:42 AM No comments:

Battlefront wants to give me a "free" 3rd edition rulebook. A rulebook that pretty much invalidates the two or three hundred dollars worth of their books that I already own. I could spring for the $60 full rulebook which includes some Late War lists, but that still irritates the hell out of me. I'm done with 'em. I will not pay money for anything with a Battlefront logo on it anymore. They refuse to publish errata, their prices rise higher, faster than the rest of the industry and I'm just tired of it.

To really get going on v3 right now, I'd have to drop $160 on books. Fucking books. Books I already have that are suddenly wrong because World War II changed dramatically from the end of last year to right now. Sorry, I'll save the money and put it towards MSH, DW or SBH MINIATURES since I like painting and playing with my toy soldiers, not hosting a fucking library.

Dystopian Wars just went through a rules update - the results of which are completely free, unless you want to buy a consolidated rulebook. I am not forced to purchase any additional updated materials. They are not screwing their customers. Yay Spartan Games.
Posted by Ski at 7:18 AM No comments: