Sunday afternoon and evening was a hotbed of gaming at Case de Ski. I held my annual gaming get-together and a group of six of us enjoyed eight hours or so of gaming and general hilarity.

First on the menu was Batman - we had a good group for a three-sided affair. We had Riddler and friends making a deal with some Suicide Squad crooks. The good guys arrive during the deal and disrupt the proceedings.

Max and I took command of Riddler's band. Mike and Mark split the Suicide Squad while Landon and Caleb shared the good guys. 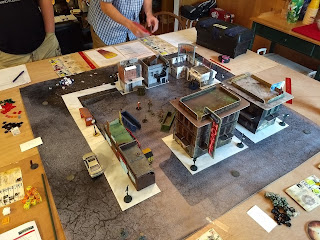 The vacant lot that was the site of the encounter. 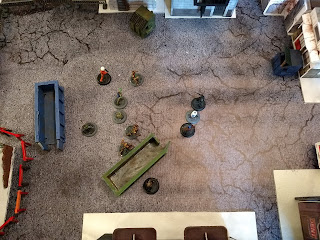 The two gangs making the swap. 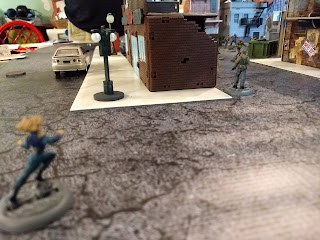 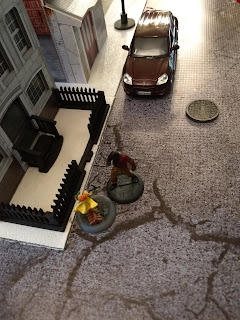 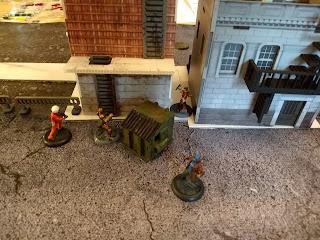 One does not become Robin by being stupid as she evades Croc, slipping down an alley into the lot. Of course there's quite a greeting party waiting for her! 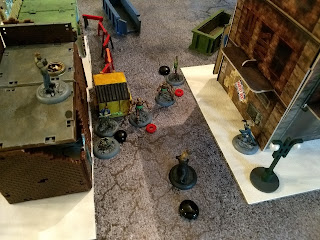 Back on the other side of the block, Black Canary has found herself in some kind of trouble. Flag made his way up to a roof top but couldn't make out any targets in the darkness. Canary let loose a sonic scream disabling two Riddler Bots. The hire gun, Goat Head Priest, who to be honest really isn't playing with a full deck, let loose a hail of lead at Canary wounding her severely and taking her out of action. 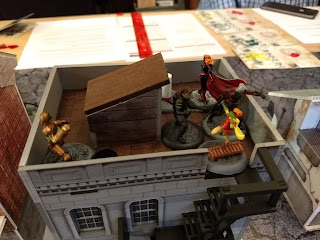 The apartment rooftop had become quite busy while that was going on. Slipknot had gone vertical with the goods and met up with Deadshot. Batwoman and Robin made their way up and turned it into a real scrum. Not to be left out, I sent one of my trashbots over to see what kind of trouble it could cause.

As it turns out, it was a good bit of trouble! Batwoman knocked out Slipknot in no time. My Riddler Bot hastened over and grabbed the objective from under law-girl's nose. Oh, BatNag and Robin were upset, let me tell you! Well, inevitably, a turn on, Batwoman pulverized the Bot and Robin grabbed the loot, leaving Suicide Squad short-sticked.

So Riddler and Co. and the good guys achieved success and the Suicide Squad really botched things. It was an entertaining encounter and something different from our norm.


Next up was Victory at Sea: Age of Dreadnoughts - a bit of WWI naval warfare. We played an ahistorical pairing of an Austro-Hungarian convoy being attacked by the Russian Black Sea fleet.

Our teams were Mike, Max and Mark on the Russian side while Caleb, Landon and I split the AH. We had to protect 10 transports across the table. 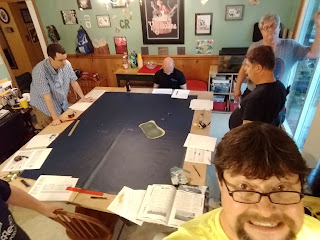 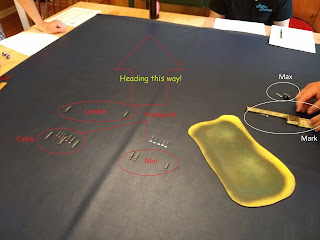 The setup - we're a turn or so in at this point. Landon commanded a pair of Tegetthoff Battleships. Caleb had a trio of Habsburg Battleships and I, a trio of Radetzky Battleships.

The Russians were Mark with the Imperatrista Mariya and Pantelimon. Max had the Tri Svyatitelya and Rostislav. Mike's two beasties were the Sinop and Georgi Pobiedonsets. 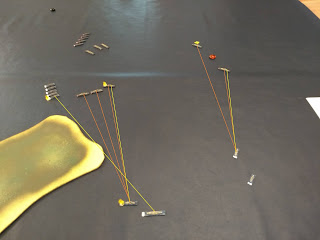 Shots start flying and falling. The Pantelimon is the first to take damage. The Russians split fire across many targets damaging a transport and one each of mine and Landon's warships. 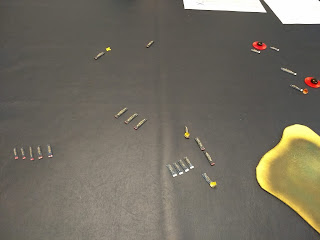 In no time, the Pantelimon is crippled and combat ineffective. One of the transports is also crippled. My lead ship, the Zrinyi is also steadily taking fire from both of Mark's ships. 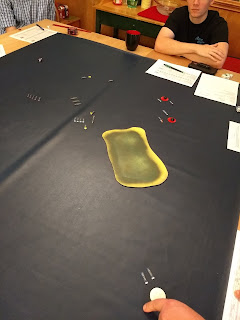 Mike's ships entered tailing the A-H convoy. IMHO, not the most effective positioning, but he was able to continually snipe the transports. 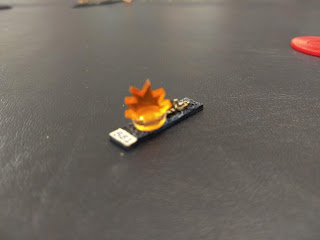 The Pantelimon goes under! 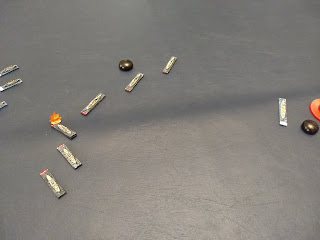 Followed shortly by the Zrinyi.

The Austro Hungarians decide on a new plan - focus fire on the smaller Russian ships and ignore the Mariya until it's alone. In no time, Max's two ships have been dealt with, but not before Landon's Szent Istvan has taken significant damage.

This left Mike's two late 1890's battleships in pursuit mode and Mark's powerful I. Mariya all alone against seven A-H ships. I spun my squadron around to deal with Mike. 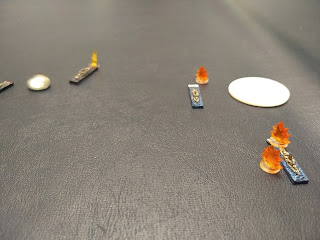 A short exchange of gunfire left one of his ships completely wrecked. Then, a torpedo finds it's mark in the side of the G. Pobiedonsets. The poor internal design of the ship meant it flooded quickly and the single torpedo was all it took to send her to the bottom. 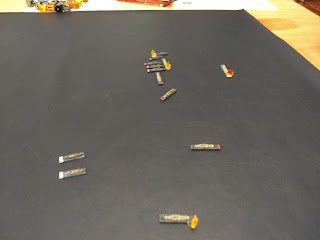 Back at the other end, things weren't any better for the Russians. The mighty Mariya was a floating fireball by this point and although she continued to fire at the transports, it was rather useless.

Mismatch aside, it was a really fun game. We should have switched roles to be honest. The Russians shuld have escorted the convoy with more ships (albeit poor-quality) and had the A-H attack the convoy with fewer, better quality ships. It certainly would have been a more even battle. The attacker still has a tough job knocking out those transports. Mike and I spent some time discussing his deployment behind our fleet. I think the Russians would have been better server with a squadron on the far side to force us to split our force. As it was, we were able to just unload on individual ships and demolish them in detail.

Thanks everyone for coming over and making it another great Memorial Day event!
Posted by Ski at 12:23 PM No comments:

Ziggy and I gave the Batman Miniatures Game a go on Saturday afternoon. I kept it simple for the first game since we we both very much in learning mode. I took control of the Riddler and three of his hench-bots, while Zig's group was Carrie Kelley and the Sons of Batman. My mission was to steal the clockwork Maguffin from one of two vehicles and hang onto it until my backup arrived. Carrie and friends were trying to put a stop to my efforts. 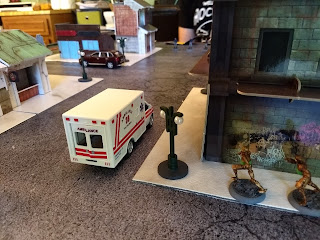 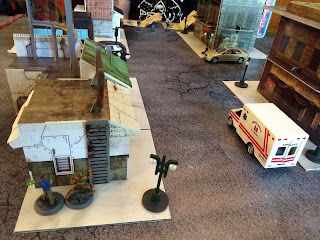 Riddler and Bot 1. The Batman gang is at the far end of the street. 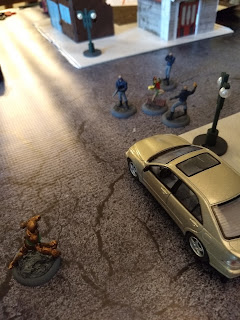 Bot 2 bravely makes a run at the Lexus. 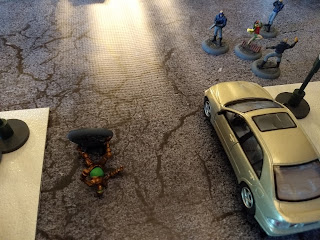 But, lo, the goon with the shotgun lays him out in the middle of Grant Avenue. 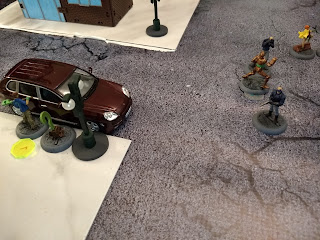 Riddler spies what he's looking for in the back seat of the Cayenne, knocks out a window and grabs it, while Bot 1 hustles over the "Gloves" to keep him occupied. 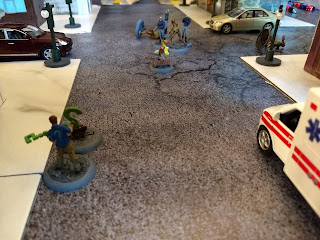 Riddler backs off with the prize while the bots get worked over by the bat-wannabes. It's still early and there's a bit of a wait until Quelle's going to arrive with the whirlybird. 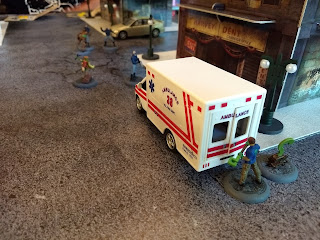 Not good. She's after me. 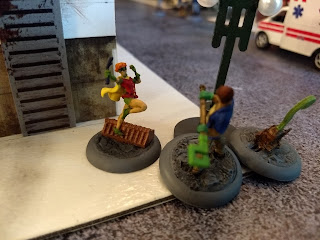 And caught as I make my way to the ladder... Blast! 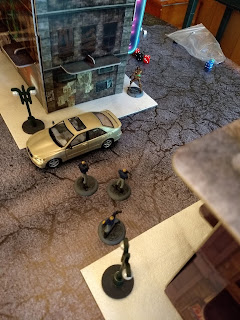 The Sons of Batman chase off my last Bot. 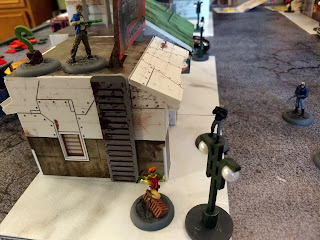 But Riddler breaks away and up the ladder he goes! Huzzah! 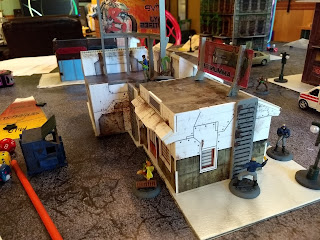 The helicopter is close! Carrie and the Sons have Riddler cornered on the rooftop. Bot 2 has turned about and is now coming back to assist! Remind me to give that one a raise. 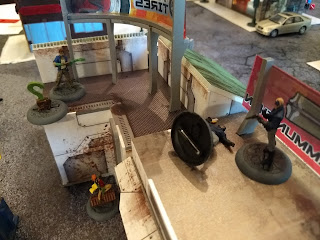 Riddler belts ol' Batarang-boy with the ?-Club. Hah. Hurry up helicopter! It was a good thing the guy with the gun was out of ammo otherwise Riddler would've been in deep kimchi. 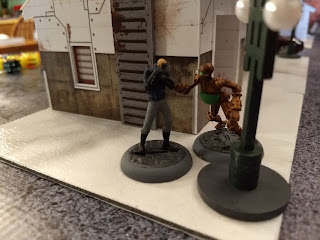 Bot 2 catches up with Gloves down below. 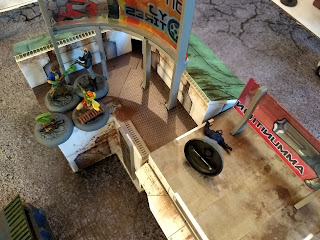 While Carrie and Shotgun catch up with Riddler just as Quelle arrives with the helo overhead. Down drops a rope ladder. Riddler evades their blows, grabs onto the ladder, and makes good his escape!

Part 2 of the story will pick up Memorial Day weekend.

Though I technically won by having the loot in my character's possession at the end or the scenario, Riddler was cornered atop the building and in big trouble when time expired. The helicopter escape was a bit of Deus ex machina if you couldn't tell.

We both rather enjoyed BMG. It's a good skirmish game made more interesting by the variety of kit each character has. I printed out cheat-sheets for all of the characters with all of their special abilities' rules so we wouldn't have to refer to the rulebook for those. I'm certainly motivated to play again. It moved a lot better than I was anticipating - I really think having the specials out and handy helped a lot.

The rules are quite straightforward and there was only one head-scratcher left unanswered - specifically, can characters freely move out of close combat or must they fight / test their way out?
Posted by Ski at 8:07 PM 2 comments: