X-Wing and a Convention!

David and I got together yesterday (Saturday) for some X-Wing. He's been working a particular list out against different opponents. He's been making minor tweaks as it goes, but it's essentially the same thing. The first time I faced his Imperial flight of five TIE Advanced, I got thrashed. I don't have that list handy but it was a First Order list including two Silencers and two TIE/fo by the looks of things.

Five extraordinarily maneuverable ships that can all perform multiple actions. Stress doesn't bother them much at all. All have one Force point which is terribly useful. David's also very good at flying swarms - he's been doing it since the game was released and still watches tournament video to see how the pros do it.

After some analysis looking for weaknesses, I targeted their universal 3 initiative and low toughness - just four hits each. They're hard to hit for sure, but any hits would be telling.

With that in mind, I put together a Resistance group that I thought would give him fits and I was right. I smashed him and his list's weaknesses were harshly exploited. This is the list which was designed to have better initiative, heavier firepower and more resilient ships. It was outnumbered but it didn't matter.

David made some minor teaks and was ready for another session with Inquisitors Five. I put together a couple of list during the week and selected another First Order list this time. It was not put together with the intention of fighting David's Inquisitors. 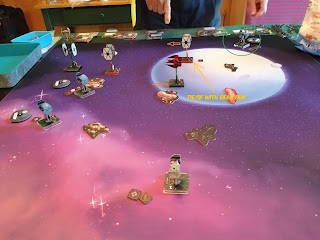 We traded kills and it was soon down tow 4v4. I set up my second kill with this situation. He'd isolated a single TIE (green circled) and I gave it a juicy target - the easy-to-hit TIE/sf. David had to assume I'd go super-defensive with it since it was also stressed and couldn't execute any wild maneuvers. It would be easy for David to guess where that ship would be. I was confident to use it as bait because it wouldn't die with but one attack. I did him a favor and pushed it forward super slowly, but spun the turret to the rear and acquired a target lock on the enemy ship. The red TIE interceptor turned in tightly to be a second set of guns on the problem. David used Heightened Perception to fire first with that ship. The shots were ineffective and did me a favor of burning his Force for the turn so he wouldn't have it to use defensively. 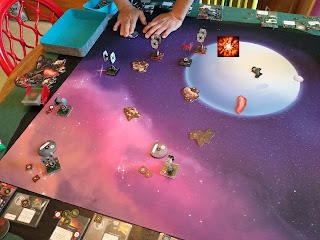 Two shots later, another Inquisitor was off the board. David's remaining three scattered and time expired as we were re-grouping.

Finally off the schnide with the First Order! A solid victory against a very worthy opponent. IMHO, I think David was a little off his game yesterday, there were a couple of mistakes that I was able to exploit with great effect. I finally managed to use a ship like the Interceptor properly with a good supporting cast. That speaks more to my usual inability to fly properly than anything. The supporting cast TIEs all have very good special rules that ALWAYS work, regardless of actions or stress status.

There, I've officially bored you to pieces with some in-depth X-Wing analysis! It gets put on the table a lot because of the quick setup and play-time but dadgum is it a good game.

In completely different news, I'll be heading off to Southern Front game convention in Raleigh, North Carolina September 17 & 18. https://www.trianglesimsociety.org/?page_id=546 I'm going to run a Star Fleet Battles scenario on Friday evening. Most of the gaming will have a historical focus. I've been to this con once before to play in a FOW tournament, many years ago. I'm really excited to be going back.

Email ThisBlogThis!Share to TwitterShare to FacebookShare to Pinterest
Labels: X-Wing