Wayne hosted a couple of games Saturday at his office. Although an unusual setting, it was great - plenty of space and quiet. There were five of us gamers in attendance, Wayne and me of course as well as David, Mark and Mike. The games on the agenda were Star Wars Armada and Battletech Alpha Strike. The SW Armada game was actually a Star Wars vs Star Trek mash-up.


The Star Destroyers were a tall order for the Klingons. In all honesty, we might have been able to get a fair fight out of a single ISD, but two! Ugh. Wayne kept telling us to cloak, but cloaking and running doesn't kill enemy ships. We had to decloak to fight and as soon as we were visible, it was almost a guaranteed crippling every time we were hit. Oh well... fun game regardless.

Game two was Alpha Strike. David and I paired up this time against Mike and Mark. Henceforth known as Mike and Coward. I took command of the following three mechs:

David had some slightly heavier mechs. Mike had a light Lance and Coward had an Assault Lance consisting of a Battlemaster, a Marauder and a Warhammer.

Mike and Coward had to damage some sewage treatment ponds, causing leaks to taint the water sources in the area. David and I were supposed to prevent that, but  honestly, defending two sludge-filled holes in the ground is a pretty tall order. We kind of defaulted to "shoot the tan mechs."

So, at the end, Mike and Mark managed to break the walls of both ponds, poisoning the creek and causing many women, children and elderly to get dysentery and other nasty diseases as a result of tainted drinking water. Surprisingly, David and I accounted for four of the Tan mechs, only losing three of ours. Of course Mark still had two Assault mechs in showroom-floor condition skulking around but hey, you gotta take your victories where you can find them!

I think we all had a great time. Thanks to Wayne for getting this all setup and hosting. Had a blast and looking forward to the next! 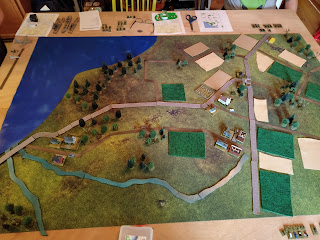