Mark came by last weekend for a bit of Dragon Rampant. He was going to bring some minis of his but since we didn't have an army list together for them we reverted to my collection. The first game saw the Dwarves (me) against the Time Travelers. It was a straightforward brawl, a tune up game if you will so we could get back into the DR mindset. 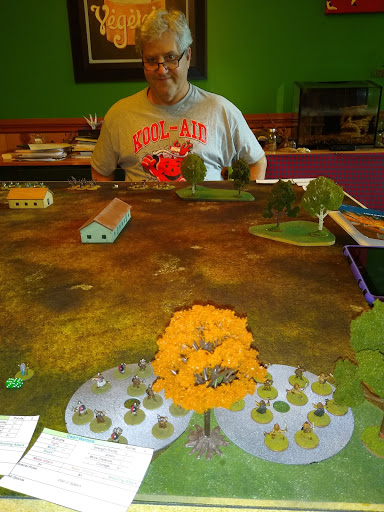 The wickedness and evil of Mark on full display. 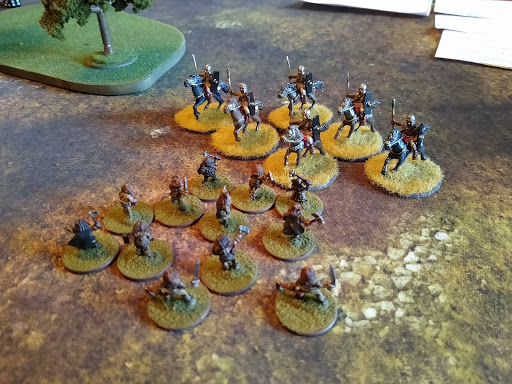 Dwarf Slayers mix it up with Roman Cavalry. The Slayers would be victorious! 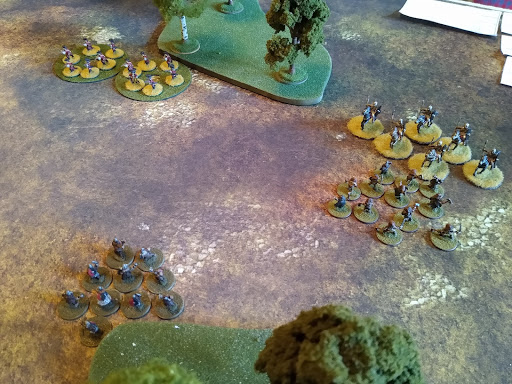 To their left a unit of Dwarf Warriors continues their advance on a unit of Musketeers. Their long walk into battle against a stationary foe was enough for one entry in the Book of Grudges; the rather accurate gunfire earned the Musketeers an entry of their own. 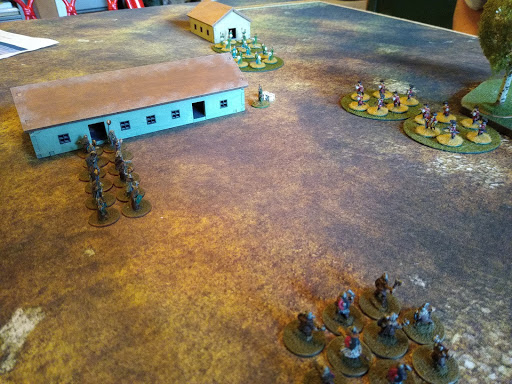 And to the left of the Warriors, the Queen's Retinue also advanced. They also took some casualties from gunfire. You can see the Chronomage at the corner of the green building and a unit of Amazon Warriors past him in the distance. 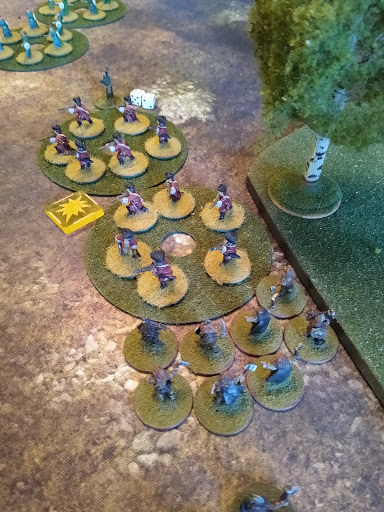 My Slayers Wild-Charge into the Musketeers. The Chronomage had used his sorcery to improve the fighting quality of the gunners and they proved to be a shockingly dangerous opponent in close combat.

And then photography was forgotten about for a bit. The melee troops bashed the hell out of each other and they were all wiped out or fleeing. All that remained were my Rangers and the Musketeers and our spellcasters. 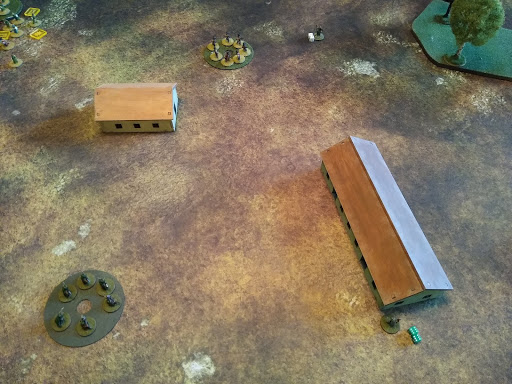 I gained the upper hand after Mark flubbed two activation rolls back to back and we called the game.

For the next game we switched armies. Mark chose Undead and I selected the High Fantasy "Good Guys." No Spellcasters for either of us this time, just old fashioned might and low cunning. We played the Death Chase scenario. I was to ambush Mark's skeleton horde. 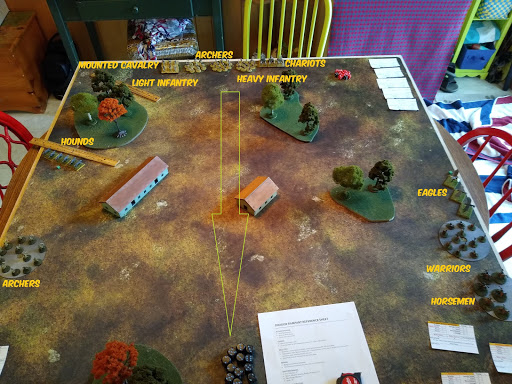 The Undead have to leg it across the table and exit units. I simply had to stop all that I could. 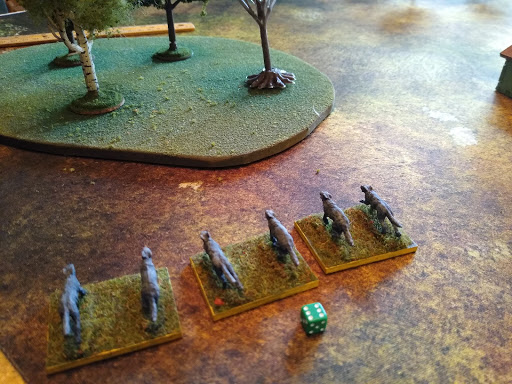 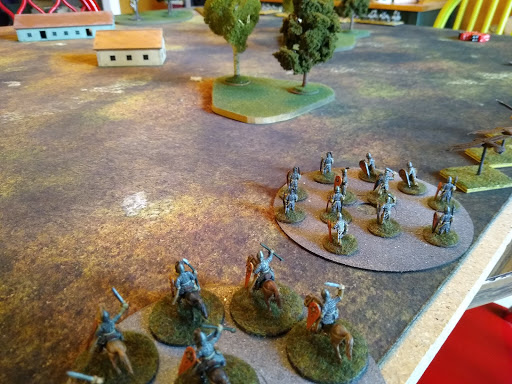 Have at thee! My fondness for Orange on full display. 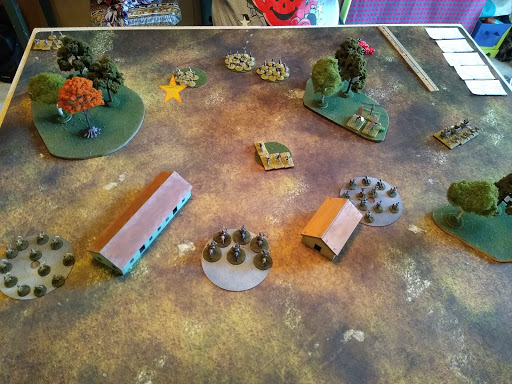 The hounds speed and Wild Charge got them stuck in quickly. Although they dished out a good bit of damage, they fell quickly. The rest of my force tightens it's grip. The chariots try to get by me! 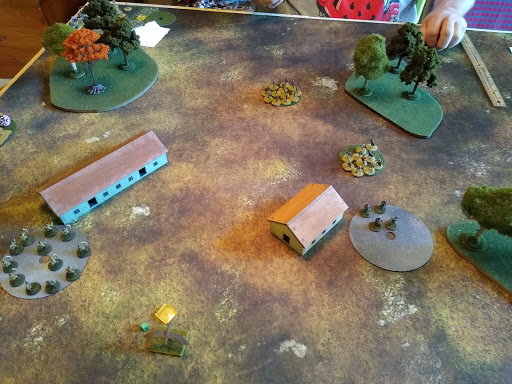 A bit later, the humans are in deep kimchi. The eagles are fleeing, the cavalry is done, the warriors are nearly depleted. 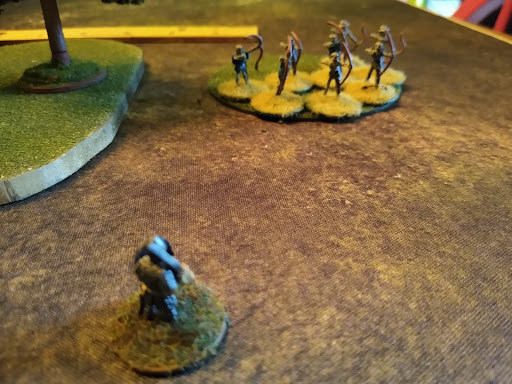 But as Mark's last unit, his Archers, rush for the table edge, Warrior Elvis rallies and charges into the unnaturals. His life is spent but with great valor!

My archers chased Mark's archers until at long last I was able to wipe out the last of them. The final score of this game was 4-3, a very close affair that really came down to the wire. It was wonderfully tense affair. Now that's a great way to spend an afternoon.